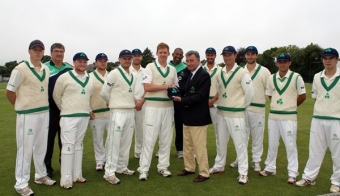 Thirty-six players have been named in the Ireland National Performance and Emerging Players Squads.

Phil Simmons praised the “quality and depth” of talent coming through when Cricket Ireland named 36 players in their National Performance and Emerging Players squads ahead of a busy winter programme. There are no fewer than 10 county-contracted players throughout the two squads, with Stuart Poynter and Andrew Balbirnie recently signing deals with Durham and Middlesex respectively.

The National Performance squad consists of the 13 players who are established in the Ireland senior team, while the 23 emerging players have impressed selectors in either international, representative, domestic or youth cricket over the past season.

“The squads show just how much quality and depth there is now in Irish cricket,” said coach Phil Simmons. “There’s a great balance of youth and experience in there, and the players know there are more opportunities than ever before.

“There are some new faces in the Emerging Players squad, with James Cameron-Dow and Simranjit Singh adding to the slow bowling options. The initiative to send the young pace guys to Australia this winter is a great one and I’m certain will bring dividends.

“We’re looking for the emerging players to challenge the established core guys. The incentive of playing in the 2015 World Cup has really galvanised everyone in Irish cricket, and it’s the perfect platform to take the sport in the country to an even higher level.

“While these players will form the basis of our planning for the 2015 and 2019 World Cups, I’d like to stress the door is always open for others to force their way in.”

In a busy winter for the players, the Ireland senior team will be undertaking a training camp in early November, playing in the ICC World Twenty20 Qualifiers and InterContinental Cup final in the UAE, and are in the process of finalising a significant tour in late January.

There are also plans for an exciting ‘A’ team tour to a Full-Member country in January, details of which are to be released shortly.

Three of the country’s most promising pace bowlers will be playing club cricket in Australia while working with consultant bowling coach Craig McDermott, while Cricket Ireland will also be using expert coaches from across Ireland and the UK for training sessions throughout the winter at both Bready and North County.

Plans are also at an advanced stage for the new National Academy under the guidance of Craig Hogan, with the first intake of young players being announced next month on two-year contracts.