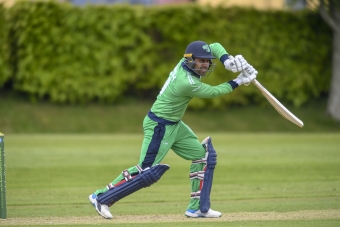 EGLINTON – Irish international Simi Singh remarkably hit his second score in the 90s for Ireland Wolves against a full-strength senior international touring side this season as the home side held its nerve and claimed a 27-run victory against Zimbabwe at Eglinton Cricket Club today.

Singh hit a 91 against Bangladesh at The Hills Cricket Club back in May, and followed up with 90 from 104 balls in this match. His innings was punctuated by nine fours and a six, and perhaps more impressively for the team he featured in three consecutive partnerships of 33, 95 and 42 showing his ability to contribute to consequential partnerships through the early-to-middle overs.

Captain Harry Tector had earlier lost the toss and found his side being sent in to bat first – a decision that the visiting captain Hamilton Masakadza would perhaps soon regret.

The home side made a highly competitive 283-9 from its 50 overs, led by Singh, Tector (36 from 52 balls) and Stephen Doheny (32 from 31 balls). A late flourish by tail-ender James Cameron-Dow of 34* from 17 balls added late runs that in the wash-up would prove crucial for the win.

In response, the Zimbabweans batted confidently, albeit at a controlled pace early. Top order batter Sean Williams, who had scored just 29 runs in four innings against the Netherlands over the last 10 days, found his form and struck an impressive century (104 from 90 balls), before being removed by paceman Peter Chase who was returning for his second spell.

The visiting side’s lower order continued well following the loss of Williams, but wickets at crucial times and a Wolves side holding both its nerves and its catches, saw the young Irish outfit a 27-run win.

All six bowlers used by the Wolves claimed at least one wicket each, with Chase (3-44) and Barry McCarthy (2-46) the multiple wicket-takers.

Zimbabwe now has a training day tomorrow before it faces the Ireland Men’s senior side in the first one-day international on Monday at Bready Cricket Club.