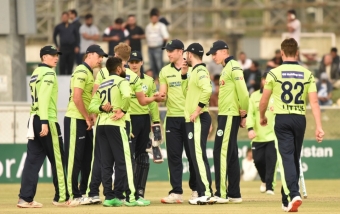 Earlier Afghanistan had forced a Super Over after Rashid Khan hit a boundary off the last ball of the home side’s innings, however Ireland’s most capped cricketer Kevin O’Brien stepped up and smashed a six off Khan to win the match for Ireland off the last ball of a tense Super Over. The win broke a seven-year losing streak for Ireland against Afghanistan, having not beaten the Asian side in T20 cricket since 2013.

Under grey, dull skies captain Andrew Balbirnie won the toss and elected to bat first on a wearing pitch.

Seeking a fast start from openers Paul Stirling and Kevin O’Brien, the Irish side stumbled early losing Stirling without scoring, and Balbirnie shortly after for 9.

O’Brien (26 from 21 balls) and Gareth Delany (37 from 29 balls) mounted a counter-attack with a 34-ball half-century partnership, but the two batters fell in the 10th and 11th overs respectively to leave Ireland teetering at 80-4.

Harry Tector continued his good middle-order form in this series, hitting 31 from 22 balls (including two sixes) – Tector finished Ireland’s leading series run-scorer with 97 runs at an average of 48.50.

The visitors struggled to find the boundary in the latter overs, and regular wickets fell to restrain Ireland’s run rate and they finished on 142-8 after 20 overs.

The Afghan openers began the run chase at a blistering rate, with Rahmanullah Gurbaz (42) and Usman Ghani (18) finding the boundary at regular intervals. Then with the score on 60, Delany struck twice in the 9th over, claiming both openers – both caught by Tector at deep mid-wicket.

The game proceeded to swing in momentum between the two sides - the Afghans keeping in touching distance of the required run rate, but uncharacteristic dismissals kept Ireland in the contest.

The seemingly decisive over was when Simi Singh claimed two wickets in two balls in his fourth over – and while he missed a hat-trick, he put the Irish side well on top with five overs to go.

Again the pendulum swung, with Afghan captain Asghar using his level-headed batting to bring his side within sight of victory, but pacemen Craig Young (1-29) and Josh Little (1-33) took late wickets to leave Afghanistan requiring 5 runs from the last ball to win. Rashid Khan duly smacked the final delivery over point for four, forcing a tie and subsequent Super Over.

Ireland needs 9 to win off 6 balls.
Stirling and O'Brien come out to bat.
Rashid Khan has ball in hand. pic.twitter.com/7GDCeFeGhf

Young, who had bowled tightly in the latter overs, was deservedly given the responsibility of bowling Ireland’s over, and delivered brilliantly by restricting the Afghans to just 8 runs off their six balls.

Stirling and O’Brien then came out needing 9 to win with Rashid Khan chosen to bowl, and despite losing Stirling on the third ball, a mighty six by O’Brien off the last delivery of the match saw Ireland to victory.

“We got 140 and a lot of people would have said we were dead and buried, but we showed a bit of fight and character there from the team that I want to see every time we go out and play. To defend 142 – and go again in the Super Over - was a brilliant effort.”

“Craig Young was brilliant I thought, he bowled a brilliant Super Over as well. T20 is all about momentum, and we had managed to take a bit of momentum into that Super Over. The guys can take a lot from that, we may have lost the series but in the last few months we’ve beaten West Indies away and now Afghanistan away, so that’s a big plus.”

“It’s taken a long time [to beat Afghanistan] and there has been some heartache, but we’ve put in some hard yards against an excellent team who will undoubtedly do well in the world cup – but we’ve got our own plans going into this year. This is just a great win for the team and morale boost for the squad.”

“You’re always learning when you play against a side like Afghanistan, they have such good spinners in their side. We’ve got young guys in our middle order who will have learnt now how to play the middle overs and construct an innings against them, you can only learn from being out there in the middle and they’ve done that.”

“To finish our tour with a win is a very happy feeling.”

Kevin O’Brien was named Player of the Match.

Match tied (Ireland won in the Super Over)