Six of the best from Ireland Women 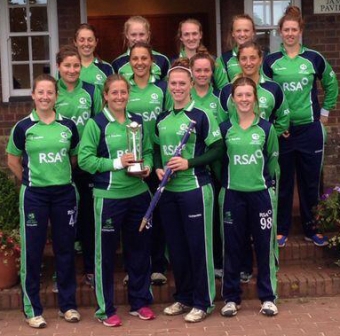 Ireland Women finished their European T20 Championships in style with two comprehensive victories against The Netherlands and Scotland at Rugby today, making it six wins out of six.

Cecelia Joyce became the second Irish woman to score an international T20 century as she made an unbeaten 119 from just 68 balls as Ireland thumped Scotland by 117 runs in the afternoon game.

Joyce clubbed a record 21 boundaries in her majestic innings, sharing a 3rd wicket stand of 160 - another Irish record - with Merrion club mate Kate McKenna, who made 45.

Their magnificent partnership saw Ireland finish on 181 for 3, which proved far too many for their opponents. Louise McCarthy claimed 3 for 7, while Kim Garth took 2 for 8 as Scotland were dismissed for just 64. Only Olivia Rae (22), and Kari Anderson (21) offered any semblance of resistance.

The morning game saw Ireland overcome The Netherlands by 84 runs in another one-sided affair.

Clare Shillington’s undefeated 72 from 59 balls (6 fours) provided the basis of their total of 143 for 4.

In reply The Netherlands could only muster 59, with Elena Tice (3-5), and Louise McCarthy the best with the ball in another emphatic all-round display.

The tournament win which was made certain yesterday, meant that Irish cricket had completed a clean sweep of European competitions this season, winning all four in which they participated.

In a further boost for the Irish camp, Cecelia Joyce was presented with the Most Valuable Player of the Tournament award.

Speaking to www.cricketireland.ie following Ireland’s win, tournament MVP Cecelia Joyce was delighted to record her maiden ton for the national side: “It was great fun batting today, particularly with my club mate (Kate) McKenna who I thought played really well and ran her socks off like only she can. We ticked some more boxes today too and beat Scotland by a larger margin again so that was pleasing. “Personally it was my first century for Ireland, so a very special day and I couldn’t be happier than to do it with TJ still here. I think he will have seen today more than ever before how much we have moved on under him as coach.”

Johnston was quick to complement the performance of the entire Irish set-up: “I can’t praise the squad and management enough. We played outstanding cricket for the week and to finish with Cecelia getting a hundred, Kate getting 40 odd and Louise doing the damage up front with the ball again was outstanding. This has been great preparation for the SA series.”

Meanwhile, Ireland captain Isobel Joyce was full of praise for the professional performance of her team, she told www.cricketireland.ie: “The girls played extremely professionally and improved each day. It was great to watch,especially Cecelia scoring a century to cap off a fantastic season for her. We’ll have a few things to figure out between now and the South Africa series but the team is in looking forward to that challenge and is excited to take them on again.”

The Irish Women are back in action next month when they play South Africa in a three-match T20 series.