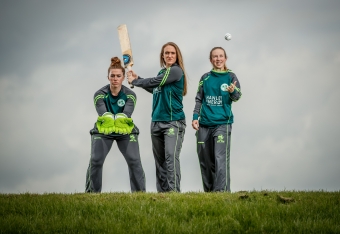 DUBLIN – Cricket Ireland has unveiled the recipients of the first-ever part-time professional contracts for women cricketers in Ireland at an event today held at the Sport Ireland Institute.

The recipients of the six contracts are:

“Today marks a significant landmark in our women’s game – we’re not just here to launch the new international season, but to announce six part-time player contracts – the first-ever in cricket in this country, and making cricket one of very few team sports in Ireland to have professionally-contracted women players.”

“Our women’s programme medium-term objective is to qualify for the ICC Women’s Championship in 2021 – a guaranteed 3-year programme of international fixtures just like our men have now, through the Future Tours Programme. These contracts put in place the foundation blocks that will help us as a cricket nation to achieve our goal.”

“We have an exciting summer of cricket – nine international matches at home, followed by an as yet unannounced quadrangular tournament in August, then the squad heads to Scotland for the T20 World Cup Qualifier.”

“With increased fixtures, training and coaching programmes, we need more availability and contact time with the players. Through a great partnership with, and support from Sport Ireland, we are today announcing that six players will benefit from new part-time player contracts. To have these players more available to practice, train and access the world-class support we have both from Cricket Ireland and the Sport Ireland Institute will give them all a great opportunity to improve and give ourselves the best chance of T20 World Cup Qualification, and further down the line an opportunity to be promoted to the ICC Women’s Championship. We hope the contracts will improve and expand year-on-year with Sport Ireland’s support.”

“We are also indebted to the sponsorship support of main sponsors Hanley Energy, and our overseas player development sponsor Devenish Nutrition both of whom play a huge part in promoting the women’s game and our pathway and performance players.” “It’s absolutely fantastic that Cricket Ireland have taken a step forward in financially supporting our female athletes in the women’s programme through offering part-time contracts. This new venture will enable the players to focus more of their energy on playing for their country.”

“It’s really important now that the Board has started this investment and that it keeps growing so that the current players can inspire the next generation of young girls coming through and that they can make a career path in cricket.”

“I’m really looking forward to having these players available on a more regular basis as we continue working on qualifying for the Women’s T20 World Cup in Australia in 2020 and ultimately retaining ODI status and gaining our ticket into the Women’s Championship in 2021.”

“I’m very excited and delighted to have been included in the small pool of players selected for a contract as Cricket Ireland take a big step forward in the women’s game. Personally, there are certain aspects of my game that I’ve have been trying to develop further. Hopefully this will allow me to spend more time working and focusing on my game whilst not having to commit to a full-time job.”

“From a captaincy point of view, this means I will have more contact time with players which should have a positive impact on our development as a group.”

“It’s great to see Cricket Ireland one of the sport bodies leading the way for other female sports in Ireland. Whilst the contracts are part-time it does allow female cricketers to concentrate a bit more on their game but we still have a way to go in order to catch up with our male counterparts.”

“It’s obviously hugely exciting for me, and to be a professional cricketer is something I’m very proud of. To have the opportunity to be in a profession I love and I’m passionate about is amazing and I’m looking forward to hopefully making big strides in my game as a result.”

“I feel very privileged to be getting a part-time contract. It’s very exciting to be able to train more and recover better. I certainly owe a lot to those who have gone before me and their years of playing. That hasn’t gone unnoticed at all. There has been huge commitment from players over the last 15-20 years.”

“I think this is a huge statement from Cricket Ireland. It shows they are taking women’s cricket seriously and hopefully it’s puts some pressure on more dominant sports in Ireland to start backing their women and giving them the chance to progress in their sport also. I think it will give Cricket itself a lift and hopefully attract more players to the game. It will also hopefully keep people in the sport longer as quite often people come to a point where they have to choose between a career and playing. Their career can now be cricket which is amazing.”

“It feels a bit surreal. I never thought we would see even semi-professionalism in my time with Irish Cricket. For me, a part-time contract allows me to commit more to cricket. Generally, working full-time means you don’t get to train as much as you would like or need to compete at the top level. I never strived to play cricket professionally but now that it is a reality, I am hugely looking forward to taking this opportunity as best I can and making the most of the increased training time.”

“It’s a really positive indicator to the strides women’s sport is making in the country. Cricket is not yet a mainstream sport in Ireland, specifically the women’s game and so to bring in semi-professionalism really gives the sport a boost.”

“I’m delighted for this step forward for the good of women’s cricket in Ireland. It is recognition, and for that I am proud. I hope it gives me the opportunity to get better and better.”

“It’s really just the beginning which is a great thing, and hopefully on merit it can expand year on year.”

“I’ve relocated from Australia to play in Ireland and have put my career as a physiotherapist on hold to play cricket. Receiving a contract enables me to dedicate more of my time to becoming the best player I can be.”

“It is a very exciting time for women’s cricket in Ireland. We have had big change in personnel this season following the retirement of 4 of our most successful players of all time. Having contracted players and the access to increased training will provide us with the opportunity to put our best foot forward for the upcoming ICC tournaments. It also allows a younger generation of female cricketers to see that there is an opportunity to earn money as a cricketer in the future.”

The confirmed fixture calendar for 2019 is:

In addition, the squad will play an as yet unannounced quadrangular tournament abroad, before heading to the Women’s T20 World Cup Qualifier in August/September in Scotland.

Cricket Ireland will be livestreaming all six T20Is played in the home fixture schedule in 2019. Details will be announced shortly.