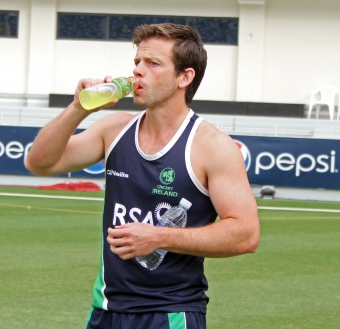 Ed Joyce showed his class having just landed in the UAE

After a winter of indoor training and facing bowling machines, Ireland need some time in the middle and they certainly got that today against Canada during the first day of a somewhat unorthodox two-day warm-up match.

Both sides agreed to a format whereby Ireland would bat all day today - regardless of how many wickets they lost - and Canada would do the same tomorrow.

Ed Joyce’s well-measured 87 was the highlight of an otherwise disappointing showing from the Ireland batsmen. The scorecard shows Niall O’Brien scored 41, but only after he added 37* the second time he batted. The same goes for Gary Wilson who added 46* to the 3 runs he got earlier in the day.

William Porterfield (9) and Paul Stirling (12) from two innings each looked short of practice, despite Stirling’s recent appearances in the BPL, and the opening pair will need to improve markedly if Ireland are retain the top spot in the World Cricket League table.

Newcomer James Shannon impressed at number 10, scoring 30 before being run out.

Ireland play UAE in the Intercontinental Cup, a competition they lead by 21 points, next week beginning on Tuesday 12th and finishing on Friday 15th. They then play the same opposition twice the following week in the World Cricket League on the 18th and 20th.