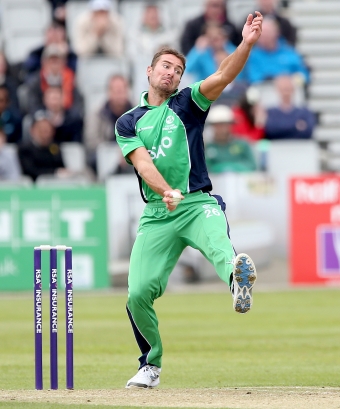 Murtagh suffered a foot fracture during training on January 7th in Dubai, where the Ireland squad are currently based ahead of their departure to Australia for the World Cup at the end of the month, and subsequently underwent surgery in the UK the following week.

Following detailed advice from the key medical staff involved, it became clear that Murtagh’s foot would not recover in time for him to play any major part in the tournament. On consideration of this, the national selectors have opted to replace Tim to ensure Ireland have a fully fit squad available from the start of the tournament.

Chairman of selectors, Alan Lewis, said: “Obviously we all feel for Tim; it is the curse all sportsmen fear. The injury was worse than we feared and with timescales as they are and Tim’s lack of match practice we had to make a quick decision.

“On the other hand one man’s misfortune is another man’s gain. I admired hugely the way Max took his bad news but I have even more respect for the way he reacted to it and now earned this spot in what is such a competitive area. We wish him all the best.”

National Head Coach, Phil Simmons, added: “It is heart-breaking news for Tim so close to the World Cup and the squad and all staff at Cricket Ireland are thinking of him.

“We are lucky that Max has been out here in Dubai with us as part of a group of fast-bowlers working with National Academy Manager Craig Hogan, and is well placed to join the squad straight away for what is a tough tournament ahead in Australia and New Zealand.”

Simmons continued: “We would like to thank the Middlesex medical team for their support. We wish Tim our very best and hope that he can get fully fit for the start of the county season and our ODI against England at Malahide on May 8th.”

Ireland play their final match of the current ODI tri-series against Scotland in Dubai on Monday January 19th – play gets underway at 5.30am GMT. You can follow that match live on www.cricketireland.ie.