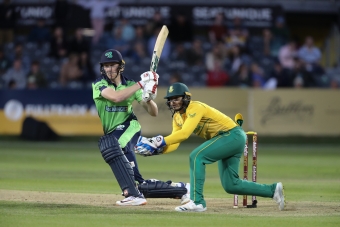 BRISTOL - Wayne Parnell took 5-30 as South Africa eased to a 44-run win over Ireland in the second T20I.

The left-arm quick ran through the Irish batting line-up as Harry Tector top-scored with 34 in an unsuccessful chase of 183.

Ireland won the toss, chose to bowl first, and were successful once again in limiting any potential damage from Quinton de Kock; the left-hander pulled Barry McCarthy to Curtis Campher at deep midwicket for 7 in the sixth over to leave South Africa 42-1.

Rassie van der Dussen never got going either, struggling to find his flow against Gareth Delany’s leg-spin before Andrew McBrine claimed the dismissal: the right-hander holed out to long-on for 4 off 14.

The impressive Delany then bowled Reeza Hendricks for 42, denying the right-hander a fifth consecutive T20I half-century. Aiden Markram was destructive, smashing 27 off 10, but Delany had him walking back too – with the Proteas 85-4 in the 13th over, Ireland looked in a strong position.

The Irish innings never really got going, with Parnell taking two wickets in two balls to send Andrew Balbirnie and Lorcan Tucker packing for ducks in the second over. Paul Stirling was threatening to cause damage, hitting 28 off 16, but a Lungi Ngidi slower ball accounted for him in the sixth over.

Barry McCarthy saved Ireland from the threat of being bowled out for double figures, putting on a last-minute show for the crowd at Bristol: he smashed 32 off 19, his new T20I-best, with three fours and two sixes included in the cameo.

But the Proteas were eventually able to taste victory, wrapping the match up with seven balls to spare. For his five-wicket haul, Parnell was Player of the Match, while Hendricks took the Player of the Series award.