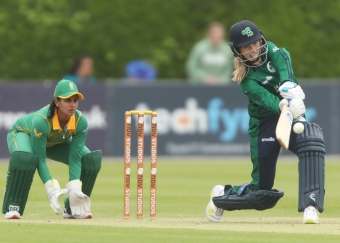 DUBLIN - Ireland Women were bowled out for 69 in the first One-Day International of The HBV Studios International Women’s Cricket Series against South Africa, eventually succumbing to a nine-wicket defeat.

Having begun strongly in the T20I series between the sides, Ireland winning the first game by 10 runs, captain Gaby Lewis won the toss and elected to bat in her country’s first-ever game in the ICC Women’s Championship, hoping to put up another strong total to trouble the 2022 Women’s Cricket World Cup semi-finalists.

However, Lewis, Player of the Series in the T20Is, was dismissed for a duck, cramped for room by a short ball from the returning Shabnim Ismail, who settled under the miscued pull shot herself.

The second and third wickets followed soon after, with Leah Paul edging Ayabonga Khaka to slip and Rachel Delaney bowled playing across the line to Ismail, and Ireland were in deep trouble at 4-3.

The introduction of Nadine de Klerk brought a momentary release in pressure, with Mary Waldron driving sweetly through point for the first boundary of the innings, but de Klerk struck back in her next over, pinning Waldron in front.

When the rain came in the 14th over, Ireland was 21-4, with Shauna Kavanagh, playing her 100th international for Ireland, and Sophie MacMahon in the midst of constructing the most substantial partnership of the innings either side of the 25-minute delay. The pair compiled runs slowly and sensibly, with their 21-run stand containing a solitary boundary, but the introduction of Raisibe Ntozakhe brought about the breakthrough, Kavanagh caught by Khaka at mid-off.

Not long after, South Africa captain Sune Luus struck twice in an over to reduce Ireland to 44-7. MacMahon was also caught by Khaka, again at mid-off, while Sarah Forbes, one of two debutants alongside Arlene Kelly, was pinned lbw, missing an attempted sweep.

Forbes’ departure allowed for the entrance of Georgina Dempsey, who played the day’s most eye-catching innings. She took the dismissal of Kelly, caught and bowled by Luus, as an invitation to counter-attack, striking Ismail, No.2 in the ICC Women’s ODI Bowling Rankings, for three consecutive boundaries, timing the ball sweetly through the off-side. A single then brought Jane Maguire on strike, with Ismail locating the yorker to send the No.10 on her way, and the speedster struck again three balls later, Cara Murray edging behind, to bring the Ireland innings to a close.

That left South Africa needing 70 to win, and Ireland began strongly in their defence. The first five overs of the innings came and went without a boundary being scored, with the wicket of Laura Wolvaardt continuing Dempsey’s fine day. The No.4-ranked batter in the ICC Women’s ODI Batting Rankings was tempted into a drive, and only succeeded in edging behind for eight.

After seven overs South Africa were 17-1 and struggling to score fluently. But Lara Goodall, top scorer in each of the Proteas’ wins in the T20I series, soon got the innings going, striking Kelly and Dempsey each for a boundary in consecutive overs. The runs began to follow thereafter, with Andrie Steyn combining for an unbeaten, match-winning 55-run stand, Steyn tucking the decisive single in the 16th over.

The next ODI, also part of the ICC Women’s Championship, will take place at the same venue on Tuesday, 14 June.