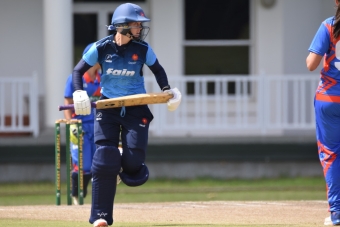 DUBLIN – South African international Robyn Searle has arrived in Ireland and will link up with Arachas Super Series side Typhoons as their overseas player for the 2022 season.

Searle, who has featured in the South African T20 side, is the captain of provincial side the Titans. She made her debut for her country in 2018 against the West Indies. In April 2021 she was part of the South African Emerging Women’s squad that toured Bangladesh.

The Johannesburg-born Searle will look to familiarise herself with Irish conditions ahead of South Africa’s 6-match series with Ireland in June. During her time in Ireland Searle will also play for The Hills Cricket Club in Fingal. She will now join up with new head coach Paul Davidge and her Typhoons team-mates ahead of next Sunday’s (May 15) Super Series 50 cup (50 over competition) game against the Dragons in Lisburn.

Searle explains what prompted her move to Ireland, saying:

“I decided to come to Ireland because I wanted to get some quality game time during our South African winter. I’m also aware that getting exposure to different conditions will be beneficial to my game. When The Hills Cricket Club approached me to come over it was an opportunity I couldn’t really turn down. It’s my first time playing for a team overseas and I’m hoping that it will push me out of my comfort zone and help to grow my game.

“I’m really excited to be here for the Irish summer. I’m hoping to contribute as much as possible with the bat to both The Hills Cricket Club and the Typhoons. I’m looking forward to playing with, and against the Irish international women as there’s lots that I can learn from them. It’s going to be a great challenge.

“My goal during the Arachas Super Series is to perform consistently at the top of the order for the Typhoons and gain as much experience in the middle as possible.”