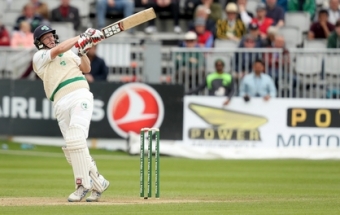 Following on from his innings top score of 40 in the first innings, O’Brien entered the fray on Day Four with Ireland finding itself at 95-4 - still needing 85 runs to avoid an innings defeat.

His innings was controlled, punctuated by some of the most commanding shots seen during the Test, but one Ireland found it could build its resistance around.

His 114-run seventh wicket stand with Stuart Thompson (53 runs) put Ireland well and truly back in the game, but no one could deny that this was O’Brien’s day as he brought up his century of 186 deliveries.

Here are some memorable photos from today courtesy of Inpho Photography: