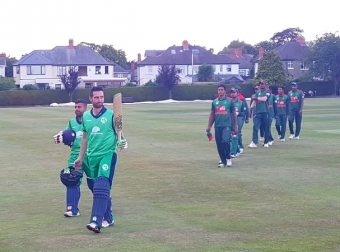 Ireland international Andrew Balbirnie struck a magnificent 160 not out as the Ireland Wolves won the fifth match against Bangladesh A to tie the series at two-apiece.

A rotation in the Wolves captaincy today saw Harry Tector step into the role for this last 50-over match of the series. Andrew Balbirnie, the Wolves skipper designate for the series, was originally not due to play today - being given a rest after his century at The Hills in the last match. However, James McCollum went down in the warm-up and Balbirnie was included at the last minutem with Tector continuing the captain’s role.

After winning the toss, Bangladesh A chose to bat first and, like several matches prior in this series, the decision looked a good one.

The visiting side posted 283-8 from their 50 overs, led by Mohammed Mithun (73 runs from 73 balls; 9 x fours) and Faisal Mahmud (74 runs from 63 balls; 7 x fours). Captain Mohammad Haque completed a good series with the bat making 46 runs, but the story of the innings - despite the highly competitive total posted - was Wolves bowler Peter Chase. Chase claimed his first five-wicket haul in a List A match, taking 5-42 from his 10 overs.

Balbirnie came out to open the run-chase with James Shannon. The early loss of Shannon (4 runs from 16 balls), saw Balbirnie and the incoming batsman Andy McBrine unleash a mighty 197-run stand for the second wicket.

Balbirnie took to the bowling from the outset and carried his bat through the innings, scoring 160* (144 balls; 18 x fours, 2 x sixes). Balbirnie gradually accelerated as his total built. His first 50 taking 64 balls, but his 3rd 50 just 27 as he unfurled all his shots.

In partnership with McBrine, the batsmen manoeuvred the ball to all parts of the field, as they collected their singles and built the partnership.

McBrine, while playing second-fiddle to the man of the moment, hit his highest List A score of 89 runs (103 balls; 9 x fours), but was out caught 11 runs short of what would have been a well-deserved century.

Speaking after the match, Balbirnie said:

“I’m absolutely thrilled with that. When you wake up in the morning, you never expect to make a score like that in a one-day game. But it’s a brilliant surface in Clontarf and you get value for your shots. I was just saying to Ed Joyce there, it was one of three or four times when I felt I could put the ball wherever I wanted, I was seeing it so big. When it happens like today, you’ve got to cash in.”

The match completes a five-match series, and leaves the sides tied 2-2, with one match abandoned. The two sides will renew acquaintances next Monday, in Clontarf once again, for the first of three T20 matches.