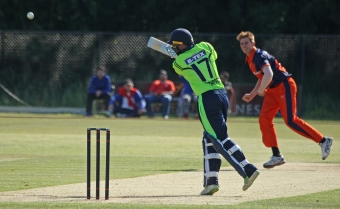 A 14-man squad has been announced

Cricket Ireland selectors have named a 14-man squad to take on India in a two-match series in Dublin on 27 and 29 June 2018.

The fixtures against India, the world’s third-ranked T20I side, have been hotly anticipated since they were announced in January - Friday’s clash is already sold out and the Wednesday fixture is expected to follow suit with only a few hundred tickets remaining. Demand to see these matches led to Cricket Ireland expanding the capacity of the Malahide Cricket Club ground from 6,500 for the recent Test match, to over 8,000 for the T20Is.

Speaking at the time of the squad announcement, Andrew White, Chairman of National Men’s Selectors for Cricket Ireland, said:

“The selectors have chosen what we believe to be a strong, in-form squad for this format of the game that balances experience with youth. Our deliberations were around finding a side that was competitive now, but with an eye to the future.”

“Many in the squad will be either travelling to Sussex this weekend for the Ed Joyce Testimonial match on Sunday, or will be re-joining the senior squad from their English County sides. We had a good look at a number of players on the recent Tri-Series in the Netherlands and this weekend’s match in Sussex will firm up the decisions made on the final playing eleven for the first fixture on Wednesday.”

“We will continue our approach of providing opportunities for a wider pool of players to gain experience in T20 cricket on the international stage. With around 12 months to go to the World T20 Cup qualifiers, we are looking to build a competitive squad for that qualification stage and hopefully to propel us into the main tournament in 2020.”

• Wednesday 27 June 2018: Only a few hundred remain and are selling fast. The game is expected to sell-out. Tickets can be pre-purchased from Ticketmaster.
• Friday 29 June 2018: This match is sold out. The men’s Ireland versus India T20I is part of a double-header, with an Ireland Women versus Bangladesh Women’s T20I starting at 11am, followed by the men’s T20I at 4pm. It is recommended that fans come early and make a day of it by watching both matches, which will ease traffic, public transport and entry conditions.
• A very limited number of hospitality packages are available across both dates. Details here.
• The 7pm and 8pm Enterprise Trains to Belfast will make a special stop at Malahide Station.