Squads announced for the men’s series against Zimbabwe 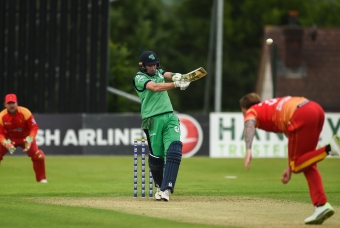 Andrew Balbirnie batting against Zimbabwe in 2019

DUBLIN – Cricket Ireland has today announced the Ireland Men’s ODI and T20I squads for the upcoming fixtures against Zimbabwe, in addition the Ireland Wolves squad has been named for the one-off match between the two white-ball series.

The T20Is will be the final home internationals in this format before the squad heads to the UAE for the ICC T20 World Cup in October, while the ODIs are part of the ICC World Cup Super League – part of the qualification pathway to the 2023 ICC Cricket World Cup.

The selection for each series is as follows:

“For the T20I series we have selected a squad of 16 for the five-match T20I series, of which it will be narrowed down to 15 each match day. Given the T20 World Cup starting in two months we want to provide as much playing time for the players in this format as possible.”

“While we have kept faith with the squad that played in the recent South Africa series, we have additionally brought Curtis Campher in for his first call-up for Ireland in the T20 format. Curtis is back bowling following his injury, and will add a dynamic batting and bowling presence to the squad. His inclusion will provide Graham Ford and Andrew Balbirnie with increased flexibility as they look to finalise their plans ahead of the World Cup.”

Regarding the ODI squad, White said:

“As we are all aware, there are no longer any meaningless ODIs when it comes to the World Cup Super League, and we have selected a squad that recognises the good performances put in during the recent South Africa series. Again, we welcome the news that Curtis [Campher] is back bowling, having come through last week’s training camp in Somerset with no concerns.”

“William Porterfield likewise has overcome his finger injury sustained during the South Africa series, and the uncapped Graham Kennedy continued to impress coaches in Somerset last week, and retains his place in the squad with his all-round ability.”

“The Selectors have been encouraged with the quality and depth of playing talent that is continuing to develop and perform this year.”

“Murray Commins and Matt Ford make their first appearances in Irish colours at any level. Commins – who is still working through his qualification period - has continued to impress selectors, coaches and fans alike with some great batting performances, while Ford has shown a consistent ability to adapt and read a given game situation, scoring quickly on a consistent basis.”

“in a similar vein, Graham Hume qualifies in April next year and we are seeking to bolster our bowling stocks ahead of a busy two-years ahead, and gets another opportunity at this level after his performances for the Wolves in Bangladesh earlier this year.”

“Another player that has continued to display great potential is left-arm spinner Mike Frost. He first appeared for the Wolves in South Africa in early 2020, and will hopefully become a future senior men’s prospect in coming years.”

“William Porterfield will lead the team in this one-off match, and will utilise the match as an opportunity for getting more game time under his belt ahead of the ODIs.”

The schedule for the Zimbabwe tour of Ireland is: