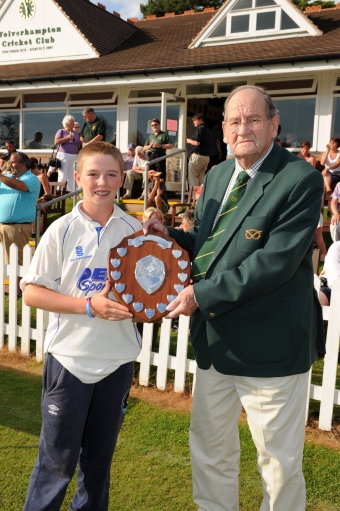 The Leinster under 15 boy’s squad enjoyed a successful visit to Wolverhampton in August when they participated in the Staffordshire Youth Cricket Tournament. They recorded four wins out of five during the festival week, with a narrow loss to Cheshire costing them the title.

They enjoyed wins over Cumbria, Norfolk, Staffordshire and Lincolnshire. Between the Interprovincial and the Wolverhampton tournament, 23 players were used which reflects the depth of cricketers at this age-group in the province.

Great weather, pristine pitches, quality opposition and the Olympic buzz in the UK at the time all helped make it a thoroughly enjoyable and memorable week of cricket for all the young players. The leading run scorer for Leinster was Brian Smyth who scored 191 runs at an average of 63. Fiachra Tucker was Leinster’s leading wicket taker with nine wickets at an miserly average of 9.5 runs per wicket. Fiachra was in fact named the bowler of the tournament as he picked up the Peter Jones Bowling Award. His controlled leg spin impressed many seasoned watchers on the boundary.

Danny Hogan ably led the team and it was great to see him set imaginative and attacking fields throughout the week.

The tournament at Wolverhampton remains a key part of the development programme and Leinster sides have always made a good account of themselves over the 10 years they have been participating at the event.

Leinster Under 15 Boy’s Squad who participated in the 2012 Staffordshire Youth Cricket Festival.

LCU tied outright with Cheshire for the 2012 tournament - same win points and bonus points but Cheshire win on ‘more wickets taken’ over the five games played.