Steven Crothers recognised for his work with Instonians 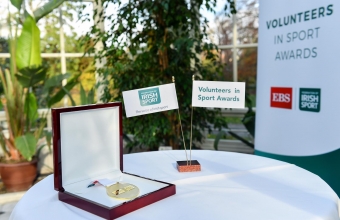 DUBLIN - The Federation of Irish Sport’s annual Volunteers in Sport Awards was held at Farmleigh House in Phoenix Park today, with Instonians’ Steven Crothers recognised with an award for his volunteer work with the club over the last 12 years.

“Steven has held roles including coaching, social media manager, youth convenor and regional coach for his club Instonians. He devotes a huge number of hours to coach cricket and nurture the upcoming youth talent at the club. He is passionate about boys and girls participating and enjoying the sport regardless of ability or experience. Steven coaches more than cricket, he teaches the kids life skills - confidence, resilience, being part of a team, trust. He is definitely a role model and encourages the kids to try new things, take risks, and engage in multiple sports. With Steven’s approach, he has developed great loyalty with the parents and this in turn has helped drive the family and community element of the club.”

“Steven has also set up a winter Cricket Academy at Under-11 and Unde- 13 age groups, aimed at the Performance-level cricketers to further develop their skills, and we have record numbers on regional squads currently. The winter sessions play a big part in this. Professional coaches and players have also been engaged by Steven to make this a fantastic experience.”

We would like to congratulate Steven on this recognition and for his work helping to grow our game in the Northern Cricket Union.