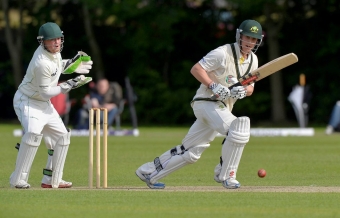 A dramatic day of three declarations and two stunning centuries has ended with Australia A in the ascendancy with Ireland on 51 for 3 needing a further 250 for victory.

Crucially one of the Irish wickets to fall is that of first innings centurion Paul Stirling, who was unable to repeat his magnificent display earlier in the day.

Following Australia A’s overnight declaration 22 year-old Stirling took a distinct liking to pace bowler James Pattinson, dispatching him for three boundaries in the first over which set the tone for another remarkable hundred for the Middlesex player - his 8th for Ireland.

Stirling dominated the proceedings to such an extent that when he reached his half century off just 44 balls (10 fours, 1 six) the scoreboard read 58 for 3, which included six extras!

Stirling found a willing partner in Andrew White, who excels in the longer format of the game. White was content to play second fiddle to the belligerent Stirling who hit 17 fours and a six. While the maximum was somewhat inadvertent, there was nothing fortunate about the other boundaries - many of which were quite simply magnifcent cover drives and square cuts.

His innings ended on 115 (142 balls, 17 fours, 1 six) when he was smartly stumped by Brad Haddin from the impressive Nathan Lyon who conceded just 34 runs in 16 overs.

Debutant Fawed Ahmed went wicketless but following a nervous start he bowled with enough variety and control to suggest that he may indeed represent the senior Australian side before the summer ends.

Skipper Kevin O’Brien declared the Irish innings at tea with the score on 186 for 4 - still 126 in arrears in an move designed to take the game forward after most of Saturday was washed out.

What followed was a brutal assault by New South Wales opener Nic Maddinson. He made Stirling’s innings look positively pedestrian by smashing 113 from just 63 balls, which included 13 fours and 6 sixes.

His partnership with Alex Doolan was worth 174 in just 122 balls before skipper Brad Haddin called off the carnage with the lead exactly 300.

Moises Henriques (2-7) dismissed John Anderson (8) and Alex Cusack (15) after Pattinson had made the initial breakthrough as Stirling edged through to Haddin.

The Instonians pair of James Shannon (11*) and Andrew White (2*) will be at the crease when play resumes at 11am tomorrow needing a further 250 runs for the victory. It’s certainly a tough ask for the Irish against a very strong attack, but not an impossible one given the nature of the pitch and the depth of their batting.

The Scorecard in full is here