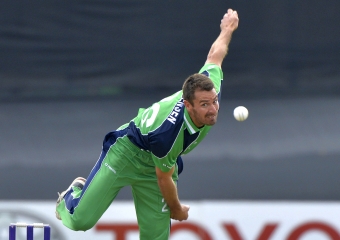 Paul Stirling and Max Sorensen return to the Ireland squad for their upcoming training camp in Dubai later this month as they continue their preparation for the 2015 ICC Cricket World Cup.

Batsman Stirling and opening bowler Sorensen were both ruled out of Ireland’s recent World Cup acclimatisation tour of Australia and New Zealand through injury, but have been passed fit to link up with the squad which will depart for the training camp on November 19th.

While in Dubai Ireland will play two fixtures against a strong New Zealand A side which includes experienced internationals Daniel Vettori, Kyle Mills and Martin Guptill.

Ed Joyce and Tim Murtagh have not been included in the squad to Dubai and will remain in the UK.

Commenting on the selection Cricket Ireland Performance Director, Richard Holdsworth, said: “Ed and Tim are responding well to treatment and rest, however the national selectors feel that their continued rehabilitation will be best served remaining in the UK under the watchful eye of their respective counties - both are expected to be available for the tour in January.”

Both Andrew White and Stuart Poynter also miss out from the squad which toured Australia and New Zealand last month, the former unavailable due to his finger injury sustained in Australia last month. Holdsworth commented “It will be hugely disappointing for both players not to be included in the 16 for the Dubai trip, however there are still 100 days to go until the World Cup and all players know that anything can happen in that time so they should all be prepared to be included.”

Meanwhile the Ireland selectors have also named a 21-strong winter training programme squad which will continue to work with Cricket Ireland coaching staff while the senior squad are away.

There are many new faces included in the squad including exciting pace-bowler Mark Adair who is currently on the books at Warwickshire, while there’s also a call up for YMCA and Leinster Lightning bowler Yaqoob Ali and promising Coleraine and North West Warriors spinner Rishi Chopra.

On the make-up of the winter training squad, Holdsworth added: “The squad includes a number of players who have previously represented Ireland and Ireland A and the selectors still believe they have the ability to challenge those in the current performance squad.  In line with our succession planning for the future we need to ensure we have all roles and disciplines covered and therefore we have included some promising young players who have performed well in the Inter-Provincial series, Ireland under-age level and in the Shapoorji Pallonji Cricket Ireland Academy”.

James Cameron Dow (North Down), Nick Larkin (North Down) and Jared Barnes (Coleraine) are currently overseas for the winter, but would otherwise have been included.

*Will not be attending until January.