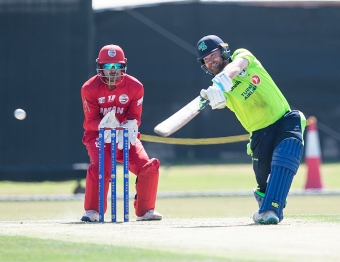 MUSCAT – Captain Paul Stirling led from the front as Ireland claimed a 15-run win over Oman in their first match of the T20I Quadrangular Tournament at the Al Amerat Cricket Ground in Oman.

Oman’s captain Ajay Lalcheta then won the toss and sent Ireland in to bat first.

Stirling and new T20 opening partner Kevin O’Brien continued their promising start as a top of the order pairing, putting on 44 from the first five overs. After losing O’Brien for 19 from 14 balls (two fours, one six), Stirling was joined in a 78-run stand with Andy Balbirnie, who hit 34 from 24 balls (four fours, one six). The partnership was Ireland’s third-highest second wicket stand in T20Is and set Ireland up for a seemingly big finale to their innings.

However, the brakes were applied to the visitors run rate as Balbirnie was dismissed with the score on 122, and Stirling dismissed three runs later. The Irish captain’s innings was his second score in the seventies in consecutive innings, falling for 71 from 51 balls (11 fours, one six).

The last five overs yielded just 34 runs, with Lorcan Tucker compiling a tidy 22* from 18 balls (three fours) and debutant Getkate chiming in with 10 runs from 8 balls. Ireland’s total of 159-5 was competitive, although the visitors were probably 15-20 runs short of what they were on target for at the halfway mark of the innings.

The Omani response got to a fast-paced start – despite losing two early wickets, the home side were well settled at 50-2 at the end of the power play. With the scoreboard ticking over regularly, Ireland were looking for inspiration – and received it in the form of spinner Simi Singh. Bowling the 10th over of the Oman innings with Oman at 73-3, Singh claimed three wickets in the space of five balls, rocking the home side, which slumped to 76-6.

Late wickets to George Dockrell, Josh Little (who claimed a dangerous looking Mohammad Nazeem for 25 with a deceiving slower ball) and Peter Chase, put the game beyond doubt and Oman finished on 144-9, giving Ireland victory by 15 runs.

After the match, Paul Stirling said:

“I think we just about got a competitive total on the board. There was a lot less grass on the wicket than over the last few days - so it wasn’t too bad a toss to lose. I think we got a score that was a minimum score we needed to get - and we knew if we got a couple of quick wickets we’d put them under pressure, and that’s exactly what happened.”

“The captaincy has been good fun, but I’m just happy we got across the line today. We didn’t really know what a good score was going to be. From a personal point of view it was good to take a few balls and get myself in and make a decent enough score.”

“I think there is plenty of work to do still - one game doesn’t make us a good team, and we need to continue to improve.”

“In terms of the tournament, the challenges keep getting harder and harder. We know what Scotland have got, and on their day - just like when they beat England the other day - they can be a real powerhouse. They’ve got a few key players that we’ll need to try and keep quiet. But I think we can get a win if we play our best.”

In the other tournament fixture today, Netherlands defeated Scotland by 7 wickets off the second last ball of the match (scorecard).

Ireland’s next match is on Friday against Scotland, with a start time of 9.45am, GMT.


A full scorecard is available here.