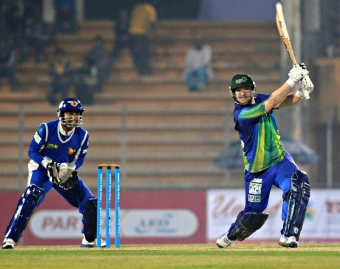 Stirling carves another one away for Sylhet

Paul Stirling is showing the world his class again as his side, the Sylhet Royals are unbeaten and top of the table in the Bangladesh Premier League.

He has set the competition alight scoring 120 runs in his 4 matches so far, at an average of 30, including a man of the match performance in his BPL debut appearance against the Barisal Burners.

It is the speed at which he is scoring however that is turning heads across Asia, Stirling’s strike rate is the highest in the competition among those who have scored 30 runs or more; he is scoring his runs at the staggering rate of 193.54, an average of nearly two runs for every delivery he faced.

Stirling is not the only Ireland player going well in Bangladesh however as brothers Kevin & Niall O’Brien are having good success with the new franchise in the tournament, the Rangpur Riders, where they are playing alongside the likes of Fidel Edwards and Dmitri Mascarenhas and Bangladesh star Nasir Hossain.

The Rangpur Riders are sitting third in the table having won two of their three matches with Niall averaging 44 with that bat and Kevin making good contributions with the ball so far. All of the lads experience in Bangladeshi conditions should put them in good stead ahead of Ireland’s tour of the UAE in March, where Ireland will play two crucial ICC World Cricket League Matches and an ICC Inter-Continental Cup match.

For anyone with a sky subscription they can watch all the Bangladesh Premier League matches on Sky Channel 834. Rangpur play Khulna today at Midday Irish time