Stirling looking for history to repeat itself 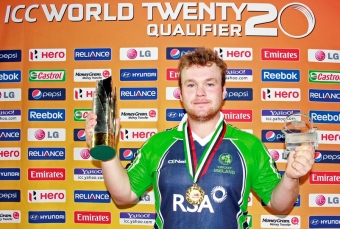 The Middlesex opener smashed blistering half centuries to help Ireland beat Namibia and Afghanistan to clinch the trophy in 2012, the latter widely recognised as one of the finest limited overs innings by an Ireland batsman.

“The T20 format is obviously one I relish playing in,” said the 23-year-old. “I’ve got license to play my shots at the top of the order, and thankfully it’s been paying off.”

Stirling’s opening partnership with skipper William Porterfield has provided Ireland with the perfect platform to remain unbeaten after seven games in the tournament, although Stirling has uncharacteristically been forced to play second fiddle.

“Porty’s been playing some fantastic cricket out here, and I’ve never seen him strike the ball so hard and so cleanly,” he admitted. “We’ve been dovetailing perfectly and it doesn’t matter to me who takes the initiative as long as we’re building stands which put the team in a winning position.” The natural order was restored on Sunday as Ireland secured their place in the ICC World Twenty 20 finals in Bangladesh with a thumping 85 run win against Hong Kong. Stirling top scoring with 77 and also claiming 4-10 with his off spin - the second best figures by an Irish player in T20 cricket.

“That display gave me personally and the team a lot of confidence. I was helped out by some fantastic catches, with James Shannon and Porty’s efforts being right out of the top drawer,” Stirling said. Stirling is in the running along with William Porterfield for the Player of the Tournament Award, sitting on eight points, just behind front runners Paras Khadka of Nepal, and Samiullah Shenwari of Afghanistan.

Ireland take on the UAE in the second semi-final at the Zayed stadium after the hosts successfully defended 117 to beat The Netherlands.

Stirling knows Ireland can expect another trial by spin: “We had a really tough game against them in the group stages, when ‘TJ’ (Trent Johnston) bowled a super final over, to get us over the line. The pitches out here obviously are low and slow, but we’ve adapted well to them, and posted some high scores, especially in the stadium.”

The Irish top order has been solid throughout, losing no more than five wickets in any match, and Stirling is backing them to continue to shine as the competition enters its final phase.

“It’s been a real team effort so far with all the guys contributing. Willo (Gary Wilson) has been incredibly consistent, and Kevin O’Brien was superb in that Hong Kong win. There’s a lot of experience in the ranks and that has served us well so far. We’re used to handling pressure having played in World Cups, and that has been a crucial difference.”

If Ireland beat the UAE they will play the winners of the Afghanistan versus Nepal match, with the final on Saturday at 2pm UK/Ireland time, again being broadcast Live on Sky Sports 3.