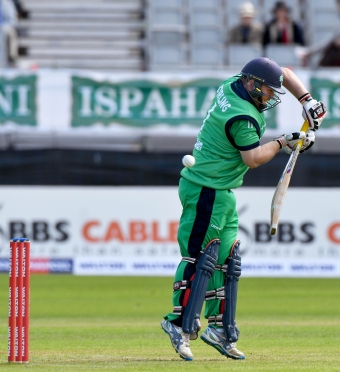 Paul Stirling’s brilliant century inspired Ireland to a five-wicket win over Afghanistan in the series decider in Sharjah.

The 27 year-old dominated a largely nerveless run chase of 177 as the Boys In Green wrapped up the victory with 12 overs to spare.

The Middlesex batsman clubbed 11 fours and 4 sixes to reach his sixth ODI century from just 93 balls, the final 20 of which came in just four balls from the unfortunate Shapoor Zadran as Stirling raced from 81 to 101 with a series of audacious pulls, hooks and one impudent flat bat six over extra cover.

The Irish had lost skipper William Porterfield (4) cheaply, but Stirling and Andrew Balbirnie (35) played positively in a second wicket stand of 62.

Balbirnie was stumped coming down the track, and when Niall O’Brien (5) was trapped by Rashid shortly after, Afghanistan sensed an opening.

However Stirling continued to bat at his belligerent best, dominating a 4th wicket stand of 51 with Gary Wilson (11). He fell with just 9 needed, but two boundaries from Kevin O’Brien (10*) sealed a most emphatic win for the Irish to end the reign of coach John Bracewell on a positive note.

While Stirling will take most of the plaudits, in truth the win was set up by a tremendous display by the Irish bowling unit, backed up by a near faultless, committed display in the field.

George Dockrell (4-28) then swung the game decisively in Ireland’s favour dismissing Shah, Nabi and Jamal in quick succession as the Afghans slumped from 102 for 3 to 109 for 6.

Whereas in the past their lower order has powered them out of trouble, it wasn’t the case this time despite the best efforts of Rashid (44) as Barry McCarthy (3-32) kept up his happy wicket-taking knack as Afghanistan were dismissed for a below-par 177.

It was a clearly delighted Paul Stirling who collected $5000 for both the Man-of-the-Match and Player of the Series awards – his second in consecutive series against Afghanistan.

“It’s a fantastic achievement by the team,” said Stirling. “We went back and did our homework after the first game after facing Mujeeb and we showed great character to win the next two games.

“The bowlers all did their jobs and we backed it up in the field. It was a serious effort in testing conditions. We would have taken 178 to chase all day long.

“I’ve a good record against Afghanistan and that gives you confidence. I didn’t dwell too long in the 90’s so didn’t have time to get nervous as the 100 approached. I was in a positive frame of mind and if the ball was there to be hit, I did!”

The win gives Ireland confidence going into the all-important World Cup Qualifiers in Zimbabwe next March, and they are currently planning to return to the UAE next month for further warm-up matches.

Ireland won by 5 wickets and take the series 2-1