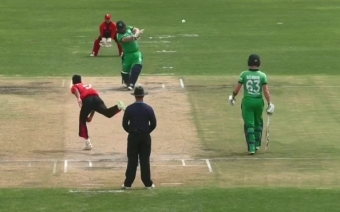 Paul Stirling remarkably smashed 156 runs for the second time in just over a week as Ireland held on to beat Hong Kong by three runs in a rain-affected match in Pretoria, South Africa.

The two teams last met in a 50-over match in 2016, when Ireland prevailed by 70 runs in Belfast, a match that saw today’s stand-in captain Gary Wilson unluckily fall short of a century scoring 95. Luck once again seemed to be against him today as he lost the toss and saw Ireland being sent in to bat under heavy, grey skies.

However, what followed that moment was what could only be described as a masterclass in power hitting by Ireland opener Paul Stirling. It was just eight days ago that Stirling struck 156 runs against an Easterns/Northerns XI, and remarkably today he once more ended with 156 runs against his name. His 128-ball inning today was studded with eight fours and 10 sixes – the last six taking him commandingly past his 150. Watch a compilation of his innings here.

After losing opening partner Niall O’Brien (18 off 13 balls; 2 x fours) in the eighth over, Stirling featured in two consecutive century stands – first with Andrew Balbirnie (37 off 42 balls; 4 x fours) and then Ed Joyce (58* off 49 balls; 4 x fours, 1 x six). Stirling’s innings was finally over when he was bowled by right-arm off-spinner Eshan Khan, who finished with 1-61 off his seven overs.

The Ireland innings was brought to an early close by a heavy downpour, and early lunch was taken after 45 overs with Ireland XI finishing on 284-3.

The extended delay in play for rain meant that by the time the Hong Kong openers emerged from the pavilion an adjusted target had been set – a very challenging target of 175 runs required from 20 overs.

With the batting side taking a T20-style approach to the run-chase, Ireland struck early with star of the day Stirling displaying his all-round skills by claiming the first wicket of 20-year old opposition captain Anshuman Rath for 2.

The next period of play was dominated by the hitting of Hong Kong’s Babar Hayat (60 off 33 balls; 6 x fours, 4 x sixes) before he was stumped leaving his crease one time too many, falling victim to that man Stirling (2-34 off four overs).

While wickets fell at regular intervals, Hong Kong put on a brave chase and fell just short of the target.

Needing nine runs to win from the final over, Captain Wilson turned to Malahide paceman Peter Chase to bowl the last over. Some tight bowling by Chase, followed by a sensational boundary rope catch by Wilson himself on the second last ball, meant that eight runs was still required with one ball to spare. That last ball was subsequently dispatched to the boundary, but victory was assured for Ireland.

Paul Stirling after the match said:

“It was great to get another good day of batting under the belt, I had a great day myself and we were in a fantastic position when the rain came and cut us a little short. Having the game reduced to 20 overs in the second innings gave us an opportunity to be in a different scenario to the other warm up games and really work on our death bowling. Hong Kong have just come out of their T20 Blitz and have given it a real go and pushed us to the end.”

This match completes the South African leg of the journey for the Ireland team. The squad now moves to Zimbabwe where they will play two warm-up matches against hosts Zimbabwe (27 February) and Scotland (1 March), before playing their opening competitive game of the Qualifiers against the Netherlands on 4 March.