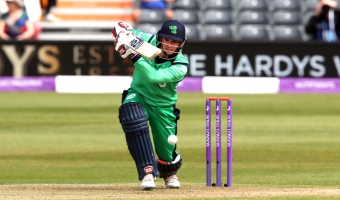 DUBLIN – Cricket Ireland has today named two squads ahead of a busy month of international men’s cricket in Ireland.

The first squad is the Senior Men’s team that will play the following matches:

The second squad is the Ireland Wolves team that will play a 50-over match against Bangladesh on 5 May 2019.

“This is an incredibly busy period for the international men’s team, playing four Full Member sides over the next month. The selection of the squads was incredibly challenging, with a number of players returning from injury, and good form being displayed by several players in La Manga.”

“We have also had the benefit of seeing a pool of established and emerging players playing competitive cricket over the winter – both in Sri Lanka with the Wolves, and in India for the Afghanistan series.” Image: Tim Murtagh against England in 2017

“We have chosen what we believe to be a squad that blends experience and youth, as well as rewarding form and consistency over recent months. As a testament to the increasing depth of talent we have at present, there are numerous players who have been unfortunate to miss out on this squad, however through the Wolves match they will have a chance to push for higher honours in the latter half of the Tri-Series and beyond.”

“Of those emerging players, we have been delighted to watch the continued improvement of Josh Little and Lorcan Tucker – both of whom will now be in the running to make their debuts in one-day international cricket. Josh gives us that left-arm pace variation and he has continued to impress with some consistent performances – we believe he can transfer his T20 skills into the one-day arena. As for Lorcan, fans of Irish cricket have seen some stellar performances by him over the first few months of the year, most notably in Sri Lanka and La Manga. While he has been on our radar and around the senior squad in recent times, we’ve started to see greater confidence and consistency in his approach, and he is definitely one of those putting his hand up at the moment.”

“The return of Gary Wilson to the squad is a boost, after missing the Afghanistan series through injury, adding lower order experience, and Stuart Thompson’s all-round seam bowling gives us options. The Selectors were also impressed with the form and consistent improvement of Barry McCarthy over recent times. Not only is Barry’s bowling at a much better place than it was this time last year, the work he has put in over the off season has been testament to his professional approach.” Ireland Wolves squad (for match on 5 May)

“With the Wolves match against Bangladesh on at the same day as Ireland plays West Indies, this will provide Selectors will be a rare opportunity to see 22 of the best Irish cricketers playing at the same time against world-class opposition.”

“It’s also good to welcome James Shannon and Tyrone Kane back from injuries – both players will hopefully use the opportunity to get back into form after their lay-offs.”

“Selectors will be paying close attention to the Wolves game, and performances at this level may well see opportunities open up at a higher level during the season.”