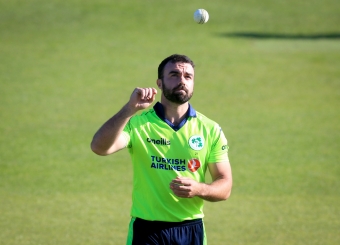 Stuart Thompson added to the squad

DUBLIN – North West Warriors’ Stuart Thompson has been called up to the ODI Training Squad on the eve of the squad’s departure for England.

The England & Wales Cricket Board (ECB), with the support of Hampshire Cricket, had agreed to provide four locally-based players to make up the numbers for Ireland’s training camp and intra-squad warm-up match next week.

However, Hampshire CCC yesterday advised Cricket Ireland that one of their allocated players had sustained an injury. Given the strict COVID-19 protocol conditions in the bio-secure venue, it was too late for Hampshire to provide a replacement player. As such, an additional Irish player (who has been COVID-19 tested and cleared this week) will now travel with the squad.

To comply with COVID-19 protocols and public health directives, the squad will depart Dublin on a special charter flight to Southampton, before being transported in bio-secure buses to a hotel within the grounds of the Ageas Bowl where they will stay until their departure on 5 August.

The opportunity to select an expanded travelling squad, combined with the lack of cricket activity over the last four months, has meant Selectors have chosen a playing group that serves two purposes – to identify players who will likely feature in the matches, and to identify players who are best placed to provide an all-round preparation programme for the batters based on the English opposition they will likely face.

Following the training sessions and two warm-up matches as part of the tour schedule, Selectors will then name a final 14-man squad for the series. The remaining eight players will stay on as cover, given the protocols around the bio-secure venue and playing conditions.

The tour schedule is:

These three ODIs are the first matches in the World Cup Super League. Matches played as part of the inaugural ICC Cricket World Cup Super League (2020-2022) are essentially World Cup Qualifier matches, as the League will serve as part of the 2023 Cricket World Cup Qualification process. It will feature thirteen teams, the twelve Full members of the International Cricket Council (ICC), and the Netherlands (who won the 2015–17 ICC World Cricket League Championship to qualify for this competition).