Squads announced ahead of 2019 Toyota Super 3s start in May 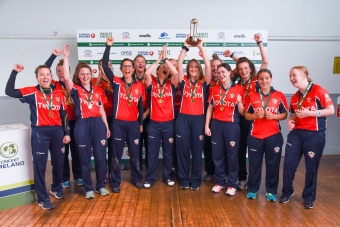 The Dragons claimed the 2018 title

DUBLIN – The squads have been released for the 2019 Toyota Super 3s series – Ireland’s peak domestic women’s cricket competition. The first round of the competition will be held on 19 May, ahead of the international T20 series between Ireland Women and West Indies Women the following week.

The Toyota Super 3’s Series features three squads – Scorchers, Typhoons and Dragons - that play a series of 20-over and 50-over matches between May and September each year.

The Dragons claimed the title in 2018, their second title in three years, and are looking for further success under new captain, Kim Garth.

Garth, the Ireland Women’s vice-captain and former captain of the Scorchers, is looking forward to leading a new squad and getting to know her new teammates. Speaking from Melbourne where she has completed the summer playing club cricket in Australia with the support of the Devenish Nutrition Women’s Overseas Player Development Scholarship Programme, she said:

“Last season it was exciting to see Lara Maritz step up when the Dragons really needed her - she bowled really well and produced consistent performances, so I’m excited to be playing with her this year.”

Asked about who she tips for being a Super 3’s player to watch in 2019 from their opposition, Garth said:

“For me, Orla Prendergast really showed last year why she is regarded as one of the most exciting cricketers coming through in Ireland. I have no doubt she will produce more outstanding performances this year - I’m just disappointed she’s no longer on my team!” Image: Kim Garth has moved to the Dragons for 2019


The Scorchers - looking to reclaim their crown

Shauna Kavanagh, Irish international and newly-named captain of the Scorchers, was proud to have led the Dragons to the title in 2018 and is excited by the new challenge. She said:

“Quantifying the importance of the Super 3’s competition is difficult in that the impact and contribution the competition has already had - and will continue to have - for women’s cricket in Ireland is huge. One of the key contributions is the expansion of the existing player pool capable of progressing to the international stage. There have been some really impressive players coming through to the international set-up over the last two years partially resulting from the opportunities that the Super 3’s competition provides.”

“I think the Super 3’s pathway also provides women and girls across the country with a visible and attainable development structure that can only encourage and promote participation.”

“I am looking forward to the fresh challenge the 2019 competition brings with the new structure of the squads. It gives individuals the opportunity to play against new opposition as well as the opportunity to learn from new individuals within their own squads. I am also excited to see the standard of this year’s competition given the strides it continues to make year on year.”

Asked about which opposition players she tips for being ones to watch in 2019, Kavanagh said:

“Lara Maritz and Louise Little are players to watch out for this year. They are both young quick bowlers with huge batting potential, and they both have a lot of ability and ambition. I imagine they will both be key performers for their squads this year.”

“Another individual from the opposition I expect to be a key performer with the bat this year is Una Raymond-Hoey. Una has worked really hard on her game over the last two years and had a really impressive season in 2018 after only returning from injury earlier in the year. Given Una’s work ethic, I expect the 2019 season to be no different and think she will be one to watch for the Typhoons.” Image: Shauna Kavanagh moves to the Scorchers in 2019

The Typhoons - seeking their first title

Laura Delany, captain of both the international women’s team and the Typhoons, said:

“The Super 3’s Series is becoming more competitive each year, and while it acts as a platform for Irish selection, I have been pleased to see how much the players have really bought into the competition since its inception in 2015. As this is a step below our international level, it is important that we keep driving the high standard that has been set over the last few years to ensure we continue to make the Super 3’s as competitive as possible.”

“The 2019 competition has seen some significant changes in squads, and I will be captaining quite a young side with what I believe contains many future internationals. We also have a new coach in place in Tim Simmonite, who won the title with the Dragons in 2018 - we’re both competitive individuals and will have an eye on the trophy, but both acutely aware that we will have to put in some big performances first.”

“I am looking forward to seeing how these players progress over the course of the summer, particularly the likes of Louise Little and Orla Prendergast, who both stood out in under-age cricket last season and I’m sure will be keen to make their mark again.”

Asked about who she tips for being a Super 3’s player to watch in 2019 from their opposition, Delany was quick to respond:

“Definitely Gaby Lewis from the Scorchers - once Gaby gets into her innings she can be very destructive as she can play all around the ground. She showcased some of this during the T20 World Cup in November last year and will be a key part of the Scorchers line-up - and a wicket we will most definitely be targeting!”