Women’s Super 50 Series to kick off on Monday; squads named 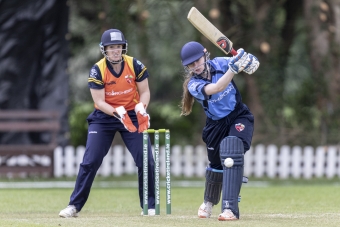 The competition kicks off next Monday

DUBLIN – Cricket Ireland today released the squad lists and confirmed two new venues for the women’s Super 50 Series which begins on Monday, with the two coaches giving their views about their teams and the importance of the competition.

The Super 50 Series is the peak performance pathway competition for players vying for international selection. The 2020 season has been impacted significantly by the pandemic, and with a 50-over World Cup Qualifier expected in late 2020, Cricket Ireland has condensed the competition this season to two teams playing only in the 50-over format. This is to keep the quality of the competition high, and recognise the fact that a number of our senior international players have remained in Australia during the lockdown, and several players who would ordinarily be involved are not available at this time.

“I’m very much looking forward to seeing a high standard of competition and having the opportunity to work with a squad of talented cricketers. It’s a massively important series for the women, as it gives them a valuable opportunity to play 50-over games against the best players in the country. Given circumstances, we don’t know how many chances we will get to play 50-over games before the World Cup qualifiers, so the Super Series has become even more important for the national sides’ preparations.”

“With regards to the team, it is great to have Gaby Lewis as captain. She has a mature head on young shoulders, thus making my job a lot easier. She leads by example and shows great enthusiasm for the game. It’s also great to have Louise McCarthy back involved in Irish cricket and it is a massive boost to have her experience back in the Super Series, especially for the younger players.”

“I have enjoyed the opportunity to get to know the players over the past while during training sessions, but the Super Series will be a great chance to further learn about how they play in match situations. While this is my first coaching involvement with women’s cricket in Ireland, I have coached female cricketers in a club environment in the UK, so am thoroughly looking forward to the Super Series and the chance to see a high level of Irish Women’s cricket.”

“It’s certainly a strange year of cricket to say the least, but it’s great that we’ve been able to salvage a really competitive and exciting looking Super Series in 2020. With months of lockdown behind us everyone is buzzing to be back at training and matches.”

“It’s hugely important that this competition provides a platform for players to develop and showcase their 50-over skills. With the World Cup qualifier still anticipated in late 2020, the chance of playing in a 50-over World Cup next year and the prospect of qualifying for the ICC Women’s Championship, this competition is hugely important for the national team. There’s a lot to look forward to and I’m sure all those involved in the Super Series will want to make a name for themselves over the eight-match series.”

“Personally, it’s been difficult trying to balance a player/coach role over the last few years. I feel it’s now the time to fully focus on my coaching and I’m excited to be back in the blue of the Typhoons. There is more than enough young talent out there that should be given the opportunity to showcase their skills at this level. I will miss playing for sure, but not the aches and pains!”