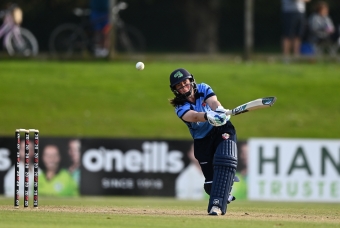 Can Laura Delany lead the Typhoons to consecutive titles?

DUBLIN – In what is a big year for Irish women’s cricket, the squads have been announced for the Super Series 2021, which sees the return of several big names who spent last season overseas.

A recent announcement about the Super Series highlighted this season will see an increase in fixtures, the re-introduction of the T20 format, creation of new coaching hubs with increased coaching contact hours and two matches set to be played in Northern Ireland (COVID-19 dependent).

The series will additionally be split into two separate competitions – a 50-over Cup and a T20 Trophy competition – moving away from the previous multi-format, hybrid competition structure. Image: Gaby Lewis will be looking to lead her side’s fightback

“Despite the challenges we faced in 2020, the Super Series was one of the strongest and most competitive in its six-year history. To watch the Typhoons, led by national captain Laura Delany, fight back to win their first title on the final day was really enjoyable and a credit to the Typhoons squad.”

“We are entering a very busy year for Irish women’s cricket, with two world cup qualifier tournaments to compete in, so it’s crucial that we ensure the Super Series helps prepare our senior internationals for these big tournaments by providing a high quality, best v best competition.”

“With livescoring and livestreaming now promoting the series, we are starting to really show the world that the depth of talent in Ireland is increasing. This added exposure will be a source of inspiration for our younger players and is an opportunity to bring the excitement of the Series to a wider audience. It was great to see some of the new names – like Jane Maguire and Amy Hunter – were added to the senior women’s squad list off the back of great Super Series performances in 2020. And that is what this competition is about – a showcase of Irish talent and a springboard for the best players on this island to test themselves and progress their careers.”

While venue allocation work has commenced, and will be announced shortly, the confirmed dates of the Super Series are:

* Dates to be confirmed in coming weeks