Swinging towards success on the biggest stage 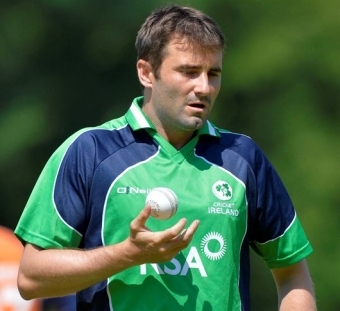 With just four weeks to go now to the RSA Challenge, Ryan Bailey chats to Tim Murtagh about his journey in recent years from Middlesex stalwart to Irish opening bowler.

Cricket Ireland’s series of articles continues to build up to the biggest cricket match ever to come to Ireland, the RSA Challenge, which sees Ireland play England at the new international ground in Malahide on September 3rd. This week with just 4 weeks to go, Ryan Bailey chats to Tim Murtagh.

There’s no doubt that playing international cricket is the pinnacle for any cricketer. The opportunity to pull on your country’s jersey is every player’s dream but of the many that devote time and effort in pursuit of the coveted goal, only a select few actually get the opportunity.

At the age of 31, Tim Murtagh thought his chances of playing on the international stage were over as the English selectors continually overlooked one of county cricket’s most consistent performers.

However, a conversation with his then Middlesex teammate Ed Joyce was the spark behind his decision to apply for Irish citizenship in October 2011 through his Dublin-born Grandfather.

“With Murtagh being an Irish name, Ed was enquiring about my family background and wondered how far the Irish routes went back and it just developed from there really.” The fast-bowler told cricketireland.ie

“It was a lengthy and often frustrating process but my determination to play international cricket for Ireland outweighed the hard work in obtaining the required documents which included by Granddad’s original birth, marriage and death certificates.” He added. By the time the first ball is bowled at Malahide’s new international venue in early September, much of the focus will be on the return of Eoin Morgan or 34-year-old Joyce who will come up against the country he represented nineteen times but it will be an equally significant game for the English-born seamer.

“It’s been a fixture which has stood out for me ever since it was announced as it will be a great occasion not just because it’s against England but also the fact that a record crowd is expected and it’s another opportunity for us to show the progress we’ve made.”

“With it being against the country of my birth it will inevitable mean a bit more for me but also for some of the other guys as well on both sides. However, I won’t feel under pressure to prove anything because the win and good team performance is more important.” Murtagh explained.

The uniqueness of representing two countries at any level isn’t a new occurrence. In fact, it’s as old as Test cricket itself and has continued right up to the modern day era. For some it’s an individual choice, a lack of opportunities or simply a decision driven by circumstances beyond their control but the implications naturally stretch beyond the simplicity of turning up in a different jersey and sporting a new badge.

Inevitably questions of loyalty arise from such a switch but for Murtagh it was the pressure of living up to expectations, performing for his adopted country and the apprehension of fitting into a new set-up as the ‘outsider’ which bothered him the most.

“Having grown up in a different country, I was a bit apprehensive about how the lads would react but they’ve been great to me so far and made me feel extremely welcome,”

“Predictably, there’s been a bit of banter back home with plenty calling me “Timmo Murtagh” which people find hilarious but everyone’s just happy for me to get the opportunity at this stage of my career.” He said.

Murtagh has been forced to bide his time to finally get his chance to break into a settled Irish side. His shiny new passport which dropped through the letterbox of his London residence last January wasn’t a direct ticket into Phil Simmons’ plans and so it proved.

Despite being available for selection, the bustling seam bowler was only named as a reserve for Ireland’s 2012 ICC World Twenty20 Qualifying campaign in March of last year before flying out to join the squad in the UAE because of injuries to Alex Cusack and John Mooney.

However, Murtagh would have to settle for a role carrying the drinks in both that campaign and the finals in Sri Lanka and admitted it was incredibly disheartening but in hindsight wouldn’t have wanted it any other way.

“It was frustrating but completely understandable and I’m glad it went that way instead of just walking into the team which was never going to happen. Ireland are a very strong and settled unit and I had to prove myself to Phil and the selectors as well as working hard in training.”

His chance to pull on a green jersey eventually came during the RSA Challenge against Australia in June 2012 but his long awaited debut was cruelly cut short by the Belfast rain. Six games on from that abandoned match in Stormont and the 31-year-old, who celebrates his birthday on Friday, feels he’s finally settled into the Irish set-up and his initial nerves are long gone.

“I was desperate to prove my worth to the Irish fans as the majority wouldn’t have seen too much of me over here and perhaps I was trying a bit too hard to impress.”

“The two games against Pakistan in May were a massive confidence boost for me as my spells in both matches proved to myself above anyway that I can compete at this level and it was just unfortunate that we couldn’t convert our fantastic position into a win but I’m sure we’ll learn from our mistakes.”

The Middlesex bowler tore through the star-studded Pakistan top-order during the narrow second One-Day International defeat in Clontarf and despite being left to rue a missed opportunity, Murtagh feels the disappointment will hold them in good stead for September’s game against England.

“It showed everyone that we can compete on a regular basis and hopefully we’ll get more and more games against the bigger nations as perhaps we’re not being tested fully in associate cricket. You need to play the best teams and sometimes be beaten to learn from the disappointments.” He explained. Murtagh progressed through the under-age teams at Surrey before breaking into the first team at the Oval after returning from the 2000 U19 World Cup, a tournament which Andrew White, John Mooney and Niall O’Brien all featured in.

After spending six years at the club where both his father and younger brother also played, he moved north of the river to Middlesex and quickly became an ever present member of the bowling attack at Lord’s.

Despite playing in the shadow of others such as Steven Finn at the Home of Cricket, Murtagh once again leads the wicket-taking charts in the LV County Championship this season with forty-two dismissals to his name and claims the unsung tag suits him.

“The talk has always been about Finny and now Toby [Roland-Jones] after his England Lions call-up or even James Harris following his big move from Glamorgan but that almost suits me. I prefer to go under the radar and go about my business quietly but affectively.”

He may thrive when the spotlight is on others but with Trent Johnston retiring in December, Murtagh is relishing the opportunity to take up the mantle and lead Ireland’s bowling attack.

“Trent has been around Irish cricket for a long time and has been a magnificent servant. They’re pretty big boots to fill but it’s up to myself and the other bowlers to step up and make sure his retirement doesn’t have a major effect on the team. Having said that, I’m really looking forward to the added responsibility.”

It’s been an opportunity which Murtagh has been forced to wait a long time for but now that he’s got a taste of international cricket, he wants to kick on and write a new chapter in his industrious career starting with September’s RSA Challenge against England.

Ryan Bailey is a freelance journalist who writes for Eurosport, Goal & Cricket World and others - you can follow him on twitter @RyanBailey37 or check out his website www.ryanbaileysport.co.uk

It is just 4 weeks to the RSA Challenge at Malahide