Tector: “I’ve only played against Associates, so I’m looking forward to the West Indies” 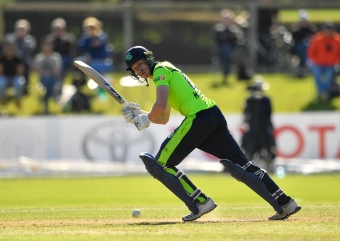 Harry Tector on debut against Scotland

ST. GEORGE’S, Grenada - The Ireland Men’s cricket team today enjoyed a day off following the end of the one-day series against West Indies, however, Harry Tector - one of the new arrivals who has joined the squad ahead of the T20 International series - was still busy preparing for a possible appearance against his first Full Member opposition.

Dublin-born Tector, 20, made his international debut in a T20I in September 2019 against Scotland. He scored 21 on debut, then followed it up with 60 and 47* in his next two T20I appearances.

Now with 14 caps to his name, Tector was part of the successful T20 World Cup Qualifying campaign and joined up with the squad on 4 January ahead of the T20I series with the West Indies.

“Since arriving we’ve been training every day - either in the gym, running or skill sessions - and we’ve obviously been with the lads going to the ground of game day during the one-day series.”

“I feel prepared and ready for the T20s. After having two weeks off after the Qualifiers in November it has been pretty flat out in the gym and training at North County. I feel acclimatised and now just looking forward to getting into the series.”

Being the first time playing in the Caribbean, what does he expect from conditions?

“It’s my first time here, but from watching the games and talking to the guys the pitches seem to be playing quite well, maybe a bit on the slower side or even a little two-paced.”

“While international cricket is probably how I thought it would be, thus far I’ve played in the T20 series at Malahide, in Oman, and at the Qualifiers - so all my caps have been against Associate nations. So I’m really looking forward to the West Indies as that will be my first test against a Full Member.”

The main ticketing website for Cricket West Indies is: https://www.zoonga.com/irelandtour