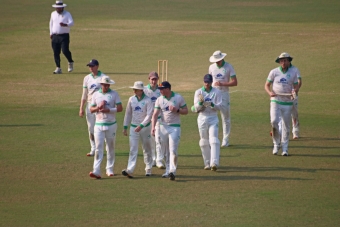 CHATTOGRAM, Bangladesh – The Ireland Wolves may have beaten by an innings and 23 runs today by Bangladesh Emerging XI, but captain Harry Tector remains resolute that the side can learn a great deal from the match and take that forward into the white-ball series starting Friday.

Speaking after the match, Tector said:

“It was a tough result, but you have to look at it in context - none of us have played a red-ball match in 18 months, so it was always going to be difficult. Particularly difficult for the guys who have come from back home who haven’t played in a while who were put straight into a four-day game against good opposition in unfamiliar conditions. I’m not making excuses, because we weren’t quite good enough in that first innings, of which we were hoping to post a big total.”

“And even though it was a tough loss, there were some good individual moments. I thought yesterday Sparky [Mark Adair] and Humey [Graham Hume] bowled beautifully, and I thought Curtis and my partnership during the first session today was really good - if we could have done that for more sustained periods of time then we would have been right in the game - but unfortunately, it didn’t turn out that way.”

“In the first innings we were probably guilty of giving some wickets to Tanvir [Islam] – certainly, I played a bad shot. But to be fair to him, he bowled really well, he was very consistent and I think the ball that was most threatening from him was the one that sort of skidded on, and also the one that gripped, he really challenged both edges consistently and we weren’t good enough to come up with a solution to counter him.”

“Batting this morning was difficult - I could have batted more aggressively and played a few more shots, but it was important that we try to occupy the crease as long as possible if we had any chance to eke out a result.”

“There’s loads we can take out of this game going into the white-ball series. We’ve played three days now on the same square we’ll be playing the next one day games, and with the earlier starts there will be a bit of dew about in the mornings, so that means you might be more inclined to bowl first because the pitch has been getting better as the day has gone on. There’s plenty we can take, and I’m sure all the players will be discussing those over coming days after a rest day tomorrow - we’re looking forward to the series.”

Earlier in the day, Tector’s side was dismissed for 139 in their second innings, with Bangladesh Emerging XI winning with a day to spare.

24-year-old Tanvir Islam proved a real handful for the Wolves as the left-arm spinner claimed match figures of 13-106, including 8-51 in the second innings. He caused problems from the outset as he claimed the opening wicket of the match, that of James McCollum (19) in the 15th over.

With Tector having won the toss and elected to bat, the Wolves were dismissed for 151 shortly after tea on the opening day - with only Curtis Campher (39) and Lorcan Tucker (20) reaching beyond 20. Conditions seemed to improve as the day wore on, and Bangladesh Emerging XI was 81-1 by stumps; Tector himself having picked up the wicket of Tanzid Hasan for 41.

The home side picked up where they left off on the second morning and had Ireland Wolves under the cosh as the bowlers toiled in the Chattogram heat. Despite Gareth Delany and Graham Hume picking up a wicket each, the hosts reached lunch on 166-3 – a lead of 15.

The hosts continued to build their lead through Towhid Hridoy and Yasir Ali. The pair put on 112 for the fourth wicket as Bangladesh Emerging XI moved from 133-3 to 245-4 before JJ Garth trapped Hridoy LBW for 36.

The new ball was taken shortly after and the seamers made light work of the Bangladesh Emerging XI’s tail as Mark Adair and Hume took 5-16 between them inside 10 overs to bowl their hosts out for 313.
Adair was the pick of the bowlers with 3-22. Hume claimed figures of 3-56.

Trailing by 162 runs as Ireland Wolves’ second innings began, things didn’t get off to the best of starts as McCollum was dismissed for one in the third over.

Jeremy Lawlor dug deep and battled his way to eight before being dismissed by Islam. This sparked a collapse of sorts as the tourists lost 3-3 inside 12 balls and Ireland Wolves limped to 35-4 at stumps on the second day.

Ireland Wolves resumed on the third morning with Tector and Campher at the crease. The pair remained resolute and added a further 58 to the overnight score.

However, Campher fell for 22 from 94 balls -  caught by Hossain Chowdury off the bowling of Saif Hassan. Lorcan Tucker and Tector survived another 10 overs before the former was stumped off the bowling of Islam for a patient five.

A five-match 50-over series gets underway on March 5. This will be followed by a two-match T20 series with matches taking place on March 17 and 18.

Bangladesh Emerging XI won by an innings and 23 runs