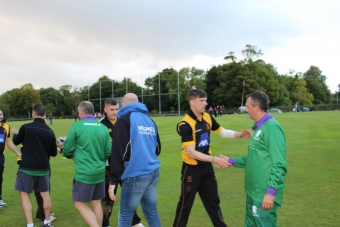 There were nail biting wins for both Railway Union and Ardmore as they both defended their targets brilliantly to advance to the Semi-Finals of the Clear Currency National Cup. There was also a comprehensive win for Terenure as they will also be in the draw which will be made tomorrow. The other spot to be filled by the winners of Midleton and Derriaghy.

Railway Union, who had home advantage for their quarter-final tie, made use of batting first by posting a highly respectable 236 all out, falling with just two deliveries of their 40 over allocation left to go. This was made even more remarkable by the fact that nobody got a half-century. Glenn Querl added 47, while there was also 43 for Kenny Carroll and 38 for Alex Stiles in a team effort with the bat. Weir was the best with the ball for Templepatrick, taking a very handy 4-37.

The Templepatrick response centered mostly around Ari Smith, who batted superbly through the innings, his fine knock of 114* was not enough to get his side home. Despite looking like they had a chance for long periods of the chase, it was a Hamza Maan inspired Railway bowling performance that kept their nerve under tight pressure to seal the nine run win. Maan took 5-41 in his spell of leg spin bowling.

There was another tight game instore between Ardmore and Balbriggan, with once again the home side coming out on top. Having batted first, Ardmore posted a more than reasonable 209-6 from their 40 overs. Peet Pienaar top scored with 74, while there was also useful knocks from Jared Wilson (38) and Ryan Brolly (37) to bring Ardmore to a competitive total.

It proved to be just too hot for Balbriggan to chase down. This was no fault of Clint Hinchliffe, who has been in tremendous form all season, scoring 82* in the run chase. However, similar to the knock of Ari Smith, it wasn’t quite enough to bring his side home. Despite Kashif Ali also chipping in with 28, a well disciplined and solid bowling effort from Ardmore, which included wickets being shared around, won them the game by 11 runs.

In the final quarter-final to be played this weekend, Terenure took home a brilliant away win from Fox Lodge with a commanding seven wicket victory. Fox Lodge won the toss and elected to bat but would have been disappointed with their overall effort of 190 all out, on which is always a small enough ground in the North West. There was excellent bowling from Terenure though, with Kenny McDonald taking 4-35 the standout. Barry Scott top scoring for Fox Lodge with 38.

Terenure’s reply was never really in doubt thanks to an enterprising 58 from 46 balls from Jack Webster at the top of the innings. He laid down a brilliant platform for the rest to go off, with young Seamus Lynch, who scored a 100 for the Leinster u17 team mid-week, continuing his good form with a 44 not out, Colm Morgan also adding 25 not out at the end. Terenure chasing down their total with 10 overs to spare.

The draw for the Clear Currency National Cup Quarter-Final will be made today the 16th July, including Railway Union, Ardmore, Terenure and Midleton/Derriaghy.