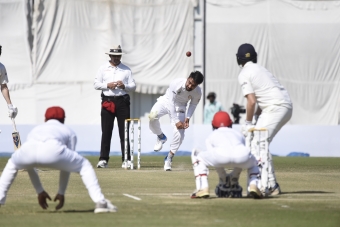 DEHRADUN – A heroic combined batting effort from Ireland, headlined by half-centuries from Andy Balbirnie and Kevin O’Brien, ensured they set Afghanistan a tricky target of 147 to chase for victory at the Rajiv Gandhi International Cricket Stadium in India.

Ireland began the day 22-1, which soon unluckily became 33-2 as Paul Stirling was given out LBW despite inside-edging onto his pad, before a century stand for the third wicket brought them back into contention.

A post-lunch slide of 4-20 seemed to have put paid to their victory hopes, only for O’Brien and George Dockrell to combine for a half-century seventh-wicket stand. Another half-century stand for the final wicket pushed the lead past three figures and towards 150 before excellent new-ball spells from Dockrell and Andy McBrine helped Ireland draw first blood in the chase.

Ireland resumed at the start of play still 120 runs behind, and the fourth ball of the day, which Balbirnie drove beautifully straight back past the bowler for four, demonstrated two things – that Ireland weren’t going to go into their shells, and that he was in some of the best form of his life.

Most of it was made in the company of James McCollum. The pair battled through to lunch in the face of some threatening bowling on a helpful wicket, putting the plays and misses and loud appeals to one side and taking full toll of the bad balls when they came. A three-ball stretch in the 30th over was a microcosm of their approach, Balbirnie surviving two LBW appeals before driving confidently for four when Rashid Khan overpitched. Image: Andy Balbirnie on the drive

The game turned in the third over after lunch with the dismissal of Balbirnie, who edged Waqar Salamkheil behind. McCollum was pinned in front by Rashid in the next over, and Stuart Poynter and Thompson each fell for one – Ihsanullah catching both at first slip, the first an extraordinary reflex catch to leave Ireland five down and leading by just 15.

O’Brien and Dockrell dug in to ensure Ireland batted out the session and remained in the contest. Dockrell was especially dogged, scoring just five off his first 34 balls, demonstrating fully the defensive technique which has earned him a growing reputation as an all-rounder, while O’Brien scored briskly without risking too much.

By tea he had his half-century, and the pair had extended Ireland’s lead to 78, but a break in play once again brought about a change in fortunes. Rashid struck three times in three overs after the break, removing Dockrell and O’Brien LBW and having Andy McBrine stumped to complete his maiden Test five-for.

Ireland were effectively 88-9, but for Tim Murtagh in this match that was familiar territory, with the No.11 having entered with his side 85-9 in the first innings. That time he compiled a situation rescuing half-century, and while he only made 27 on this occasion, his 58-run stand with debutant James Cameron-Dow shifted the momentum all the same.

The pair played freely and earned their good fortune; while a number of boundaries came through edges and false shots, a number more were convincingly struck. Afghanistan’s bowlers began to feel the strain, dropping short in the face of the assault and being punished accordingly, before Murtagh top-edged a pull and was caught by Rahmat Shah running in at deep midwicket, having once again dragged his side back into the game.

An excellent over-rate meant Ireland were able to get through 16 overs before stumps, and Dockrell and McBrine were quickly into their work, each bowling metronomic new-ball spells to tie their opponents down. They got their reward in the 10th over with perhaps the worst ball they had bowled between them, McBrine sliding one down the leg-side only for Mohammad Shahzad to tickle a catch behind. After 10 overs, Afghanistan were 5-1.

By stumps they had lifted themselves to 29-1 as Rahmat and Ihsanullah finally loosened the shackles, the former twice pulling for four and the latter hitting consecutive Dockrell deliveries for six and four. With the spinners finding assistance, and 118 runs still needed, the result remains firmly up for grabs heading into the fourth day.


A full scorecard can be found here.