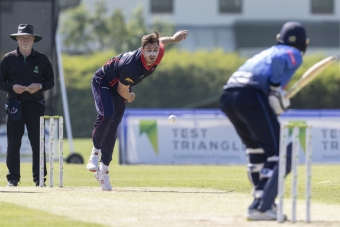 Mark Adair in action during the 2019 Inter-Provincial Series

DUBLIN – Cricket Ireland today released the fixture schedules for the men’s Test Triangle Inter-Provincial Series and the women’s Super 50 Series for the 2020 season, which includes the return to top-level domestic men’s cricket to Cork.

Given the impacts on timings and fixture schedules stemming from the COVID-19 pandemic, the 2020 season will see:

• the men’s Test Triangle Inter-Provincial Series only featuring 20-over and 50-over formats;
• most men’s Test Triangle Inter-Provincial Series matches being played mid-week to minimise availability impacts on club grounds on weekends; and
• the women’s Super 50 Series only featuring two teams and playing only the 50-over format.

With the growing demand to be able to follow these two competitions, Cricket Ireland will be implementing new systems for the two competitions to greatly enhance fans ability to watch games remotely, with details of this to be announced shortly.

“We are delighted to be making this announcement today – going back six weeks or so, we had been staring at the distinct possibility of losing our entire season. Now, we are able to announce an albeit condensed season at the inter-provincial level with 26 fixtures across the men’s and women’s competitions.”

“With the men’s T20 World Cup being postponed until 2021, the Inter-Provincial Series takes on even greater importance for our senior players, given these will be the highest-level competitive fixtures that they will play possibly until January. We already have a number of international sides enquiring about locking in dates to play previously postponed fixtures, so we need to provide our senior squad with as much high-quality competitive cricket as we can for what remains of this season.”

“We are also pleased to see Inter-Provincial matches return to The Mardyke this season, with the Munster Reds hosting two T20 matches in September. Cricket fans will be able to see their local side take on Leinster Lightning and Northern Knights in what promises to be two exciting fixtures that will feature numerous international stars.”

“The women’s Super 50 Series comes at an opportune time, given the important 50-over World Cup Qualifier and 50-over World Cup tournaments that are still slated to be held in late 2020 and early 2021 respectively. To give the squad the best chance to qualify, we have for this season condensed the competition to two teams to keep the quality high. There is also a practical reason for this as a number of our senior international players have remained in Australia during the lockdown, and several players who would ordinarily be involved are not available at this time.”

“The Super Series will focus primarily on the 50-over format as that is the format our senior players will need to be playing in as we approach the crucially important international competitions. We are hoping the ICC will soon confirm the details of these tournaments so that we can also plan a build-up schedule and give our players and coaches adequate time to prepare properly.”

“These fixture schedules, elite return-to-play protocols and venue allocations have been consulted on widely, and we would like to acknowledge Sport Ireland, Sport NI, the Provincial Unions, players and IACUS for supporting this work. It has truly been a team effort off the field to get our elite teams on the field.”

About the playing of the 50-over format at elite level but not at club level, Holdsworth said:

“It became clear through the widespread consultation process that returning to play in the game’s shortest format – rather than over a 7+ hours period in a 50-over match – was the safest way for the recreational game to start.”

“By contrast, we have the resources and ability to create safe environments for our elite players at the Inter-Provincial Series and Super Series level that we cannot expect to be implemented at recreational levels of the game. A wide range of mitigating protocols and actions will be put in place for these matches to ensure player, match official and staff safety, including pre-event health questionnaires, temperature checks for all on arrival, Cricket Ireland medical and support staff being present throughout matches, and operational staff from Cricket Ireland and Provincial Unions to help ensure the safe and smooth operation of the matches.”

“So, under strict public health guidance and abiding by new elite-level cricket protocols agreed with the Government experts north and south, our plan is one of gradual introduction of 50-over cricket at an elite level during August and September. Within highly-controlled environments we will also look to operate 50-over cricket for the women’s Super 50 Series in August to help prepare the players for the pending Women’s World Cup Qualifier which is due to be played in the autumn. Then in September the men’s Inter-Provincial competition will begin to feature some 50-over cricket, to help prepare the men’s national team for the ODI World Cup Super League.”

“Government guidelines will continue to be reviewed throughout the Return to Play implementation phase and our protocols will be updated accordingly.”