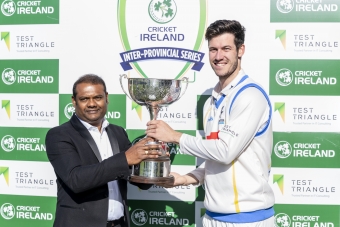 DUBLIN – Irish internationals George Dockrell and Gary Wilson hailed the development of domestic cricket in Ireland, and its growing importance to the future needs of the international squad ahead of a trophy presentation ceremony at YMCA Cricket Club.

The presentation ceremony was conducted by Praveen Madire, Founder of IT-services company Test Triangle, which was named as the new title sponsor in 2019.

Asked about what makes the Lightning side consistently successful, he said:

“I think there are various factors, we’ve got some very good cricketers who fill roles within our squad and a lot of depth as well - when new guys come in they come in to do a job within the team. We’ve also had fantastic structures as well, first with Albie [Albert van der Merwe] and now Nigel Jones coming in as Head Coach - we’ve had some great guys supporting us through it. This is the first year with Jonesy and every coach brings something a little bit different. Albie was great, and a new coach often brings in a new set of eyes, sometimes they come at things from a little bit of a different perspective.”

Asked about the impact of Irish internationals returning to play in the Inter-Provincial Series, he said:

“It’s great - every single year we have guys coming back from England, adding to the standard and adding to the knowledge of the side, helping out the younger guys and raising the standard of the competition. Having three teams still ensures a concentrated competition, and anytime you can add a guy like that it only raises the standard further.”

Asked about the opportunity that the Inter-Provincial Series offers, he said: Gary Wilson, captain of the Northern Knights team, was presented with the Test Triangle Inter-Provincial Trophy, after his side won the 20-over competition. 2019 was Wilson’s first full season back in the Irish Inter-Provincial Series since his return from playing 12 years in English county cricket.

He said about the Knights season:

“I don’t think it was just the T20 competition that we performed well as a squad - it was disappointing that we couldn’t get over the line in the three-day championship, and we maybe let ourselves down once or twice during the one-day comp, but I think our performances are the product of a lot of hard work put in by the guys and a lot of work behind-the-scenes that [Coach] Simon Johnston has put in over the years.”

Asked about his first full year playing in the Inter-Provincial Series, he said:

“While it was obviously frustrating with the weather this year, I’ve been very impressed with the standard of the Series and the way the whole competition has been run.”

“From my perspective, the Inter-Pro competition is a great pathway into the international side, not the only pathway - as club cricket is still important - but if you are playing well at club cricket level then hopefully you’ll get picked for the provincial side, and if you play well at provincial level then there’s a chance you will get selected for the Wolves and then Ireland. And we’ve seen that in recent times. The more you can put your hand up in Inter-Pro cricket now, the more chance you have to get selected for the international side.” “Colleagues at Test Triangle are delighted to support Irish cricket, and believe that the Inter-Provincial Series provides an invaluable talent pipeline to the national team. It’s an incredibly exciting time for fans of Irish cricket, and that is first and foremost what we are – fans.”

“We want the sport to grow and the national team to succeed, and just being here today - watching some of the best cricketers in Ireland training - you can see the talent in the ranks and dedication they put in to their game. To know that the Test Triangle Inter-Provincial Series allows best v best to challenge each other in the three formats of the game makes us very pleased to sponsor what is the peak men’s domestic competition in Ireland.” Image: The Northern Knights and Leinster Lightning picked up titles in 2019


The Inter-Provincial Series was re-launched in its current format in 2013. The honours board is as follows: