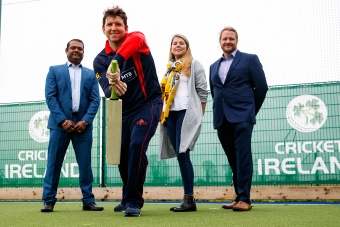 DUBLIN – Dublin-based IT services company Test Triangle has been unveiled as the new title sponsor for the 2019 and 2020 Inter-Provincial Series.

Test Triangle was founded in 2012 and provides IT consultancy and support services to a range of industries, including Banking and Finance, Healthcare, Retail, IT and Education. The company employs over 200 staff and is proud of its work in supporting Ireland’s emerging, and leading-edge technology needs.

The Test Triangle Inter-Provincial Series is the peak domestic men’s cricket competition in Ireland, featuring three provincial sides in all formats - Leinster Lightning, Northern Knights, North West Warriors, and the Munster Reds who compete in the T20 fixtures within the Series.

While Leinster Lightning has been the dominant side in all formats since the Series was revitalised in 2013, last year saw the North West Warriors claim the Championship for the first time, ending the Lightning’s five-year grip on the trophy.

This year the competition will feature most of the Irish senior men’s squad, with Gary Wilson and Barry McCarthy set to make their first appearances in the competition.

The first 50-over match in the series will see the Inter-Provincial Cup defending champions Leinster Lightning take on the North West Warriors on 22 April 2019 at the La Manga Club in Spain.

All Inter-Provincial matches will be live-scored via the My Cricket Ireland app, downloadable from: www.mycricket.ie.

“Irish cricket continues to make great strides in its development on the international stage, and on the domestic front interest and participation has never been greater. Essential to this continued growth is a First-class competition and Test Triangle are very proud to support this through our sponsorship of the 2019 Inter-Provincial Series.”

“2019 promises to be a fantastic competition that we hope all the supporters enjoy and the most deserving team wins the various cups and trophies”.

“Cricket Ireland is delighted to have Test Triangle on board as the new title sponsors of the Inter-Provincial Series for the next two years. Test Triangle recently joined as our official IT Partners but have now deepened their commitment to Irish cricket after a very short period, which we’re grateful to Praveen Madire and his team for.”

“In a short period of time, Test Triangle have already built up a very impressive portfolio of blue chip clients, and like Cricket Ireland, the company is ambitious, progressive, working to grow their global footprint and not afraid to take risks along the way. We believe these shared values will enable this partnership to grow from strength to strength.”