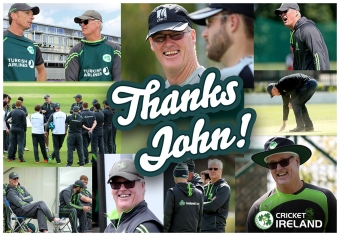 John Bracewell signed off as Ireland Men’s Head Coach with a series win over Afghanistan on Sunday.

The hard-working New Zealander took over from Phil Simmons following the 2015 World Cup and secured qualification for the 2016 World Twenty20 when Ireland topped their group.

Under his tenure the team won five of their seven ICC InterContinental Cup matches to secure second place in the table, losing only one match.

A well-respected figure in the dressing room, he has been admired by everyone for his dedication, knowledge and attention to detail which will stand Ireland in good stead when they take their first steps into Test cricket next May.

Cricket Ireland performance director Richard Holdsworth paid tribute to Bracewell saying: “We are all proud to have worked with John over the past three seasons. He’s a great person and has made friends for life within the squad and support staff. He has been highly professional and selfless to the end and we are all so happy to be able to sign off with a win for him.

Everyone in Cricket Ireland would like to thank John for his hard work and professionalism, his charm and good humour will be missed by all in the organisation.”