The Spanish base propelling Irish women’s cricket onto world stage 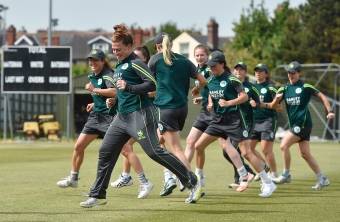 The WT20 squad flew out to Spain this morning

The Ireland Women’s World T20 squad have flown out to Spain this morning for a four-day warm weather training camp, as part of its preparations for the upcoming ICC World T20 tournament in the Caribbean next month.

Their destination is the La Manga Club, outside Murcia, which is the home of the European Cricket Performance Centre. This Centre was designed to help international and first-class county teams, cricket clubs, universities, and schools, as well as assisting with the development of players and coaches. It regularly hosts warm-weather training camps by professional teams as well as being a regular venue for ICC European tournaments. Cricket Ireland (and Cricket Scotland) have a long-term agreement with La Manga Club to use the base for warm-weather preparations for the international teams.

Aaron Hamilton, National Women’s Head Coach and Performance Pathway Manager, provided an insight into the planning for the tournament:

“We’re looking forward to the four-day camp at La Manga, as it is an essential part of our squad’s preparations for the World T20 tournament. Since qualification was secured in July we have been concentrating on rolling out a comprehensive preparation programme for the squad that is designed to ensure the players’ fitness and conditioning peaks at the tournament.”

“The timing of the tournament is not ideal for us - given it’s during our winter and three months after the domestic cricket season has been completed – however, the players have been diligently preparing themselves for the task ahead. To date, we have held a series of training camps and skills sessions at the new Cricket Ireland High Performance Centre and the Sport Ireland Institute.”
“However, nothing prepares you for a tour to the Caribbean like some warm weather training, so we are fortunate to have the opportunity to travel to Spain. Once there we will be using their outdoor facilities and getting a little more acclimatised to playing in conditions that will be more like Guyana.” “We’re expecting average temperatures in the late-20s and high humidity during the tournament, so getting ourselves ready to perform in those conditions is a key part of our preparations. It is also where our nutrition and conditioning programmes come into play – in such humid conditions you need to be well-hydrated and to be eating well.”

“The squad has never travelled to a major tournament with such a comprehensive support team, which this time will include a sports psychologist (Anne Marie Kennedy). All up, we believe we have the structures in place to support our squad so they can play at their best.”

“As always, full credit to the players – each of them are juggling either full-time work or study with their training schedules, so their dedication to the cause is admirable. Cricket Ireland would like to acknowledge the support of all employers and educational institutions in accommodating the needs of our players as they prepare for this big occasion.”