“The squad are in a very good headspace”, the role of sports psychology at the WT20 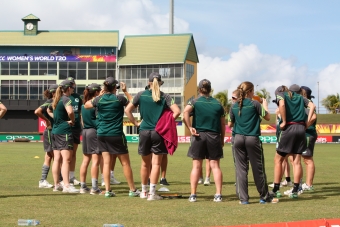 GEORGETOWN – As the Ireland Women’s cricket team begin their match day preparations for the all-important Group Stage clash with Pakistan today, Anne Marie Kennedy – the squad’s consultant sports psychologist – gave an insight into the squad’s mental preparations and how the players have benefitted from having access to her expertise in the lead up to one of their biggest games in recent memory.

“Since we got to Guyana I have been reiterating and reinforcing all the mental skills we have developed and have been working hard on over the past few months. To complement the psychological skills training, I have introduced mindfulness to the players not only as a performance enhancement tool but also to help them personally to regulate emotions, stay grounded and present,” said Kennedy.

“The application of mindfulness to athletes is scientifically proven to increase focus, attention regulation, clarity of thought, emotional control and the ability to stay in the present, all basic mental skills for any great athlete.”

“During our athletic mindfulness sessions the team get the ‘MVP Treatment’ - Meditation, Visualisation and Positive Self-Talk. After which each player is very focused on what they need to do and how they are going to do it. It’s a very empowering practice and one that they have taken on with great enthusiasm.”

Kennedy was keen to stress the squad had moved on from the first match against Australia.

“Overall, the squad are in a very good headspace - the collective mindset is very positive. We took a lot of confidence from our win against Sri Lanka and we are looking forward to the upcoming clash with Pakistan. We came out here wanting to compete and not just participate, and we are very satisfied that we are on track with our targets.”

“We know we have tough challenges ahead but we are committed to playing our own game, executing our own processes and putting in good performances.”

And asked what value a sports psychologist has brought to the squad?

“I’m biased of course but I think it’s vital that a sport psychologist is involved. Performance is not just technical and physical. If you are not working on your mental preparation you are neglecting a huge piece of the pie. You could be the most talented athlete in practice with the best technical skills and physical prowess but if you can’t regulate your emotions, manage distractions and setbacks, focus on the relevant cues and perform under pressure you will not be able to execute your skills to the best of your ability.”

“You cannot leave your mental skills to chance. Full credit to Head Coach Aaron Hamilton for his progressive mindset. He fully backs the sport psychology programme and has given me a lot very valuable contact time to develop our players. A lot of work done but still much more to do. It’s a very exciting time to be involved in Irish cricket.”

The clash between Ireland (world ranked 10th) and Pakistan (world ranked 7th) is set to be an evenly contested match. The sides haven’t met in the T20 arena since 2014, with Pakistan victorious in two of the last three matches between the sides, however the victory last Wednesday night over Sri Lanka showed that the Irish side won’t fear another spin-heavy team from the Asian region. Both sides have succumbed to Australia in the Group Stage so far, and will both be keen to register their first tournament victory.