The story behind the Joburg Cricket Club - and its Irish connections 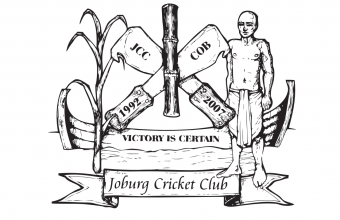 We delve behind the scenes and learn the fascinating history behind the Joburg Cricket Club - and its solid Irish connections!

The “Joburg Cricket Club” is 30 years young. It’s creation and quest for Home Ground was born out of the emotional and spiritual journey of 7 men hailing from the Chatsworth area of Durban in Kwazulu-Natal South Africa. They called themselves the “Chatsworth Old Boys”.

Their resolve and initiative was “that cricket played in the true spirit of the game can create lasting friendships and build human solidarity based on the precepts of fair play, respect for one’s opponents and support for one’s teammates”. In order to be considered a serious club they needed to be affiliated to a Home Ground. In a city the size of Johannesburg you can imagine there was no lack of open spaces to select from and yet, they consciously chose to root the game of cricket in a socially and economically deprived part of Johannesburg in desperate need of rejuvenation. It was here in 2007 in the heart of Bertrams that the Chatsworth Old Boys finally constructed their vision and called it the “Joburg Cricket Club”.

Their intention was then and is, even more today, to use cricket as a catalyst for community youth development. The Joburg Cricket Club is open to anyone and everyone there is zero discrimination on any grounds, especially wealth, sex and age. Every Player and Member joins and plays for free. It is run entirely on sponsorship and serviced by volunteers who serve to broaden their horizon as to the potential of using the game of cricket to create hope for those who need it most. It is therefore no coincidence that they named their beloved Home Ground: ‘HOPE VILLAGE’.

The Club’s Logo has as much thought and precision behind it as the positioning of the Home Ground. It depicts two, crossed sugar cane knives under a stalk of sugar cane with a bare chested slave to the right and a Sugar cane plant to the left. All resting on a floating dhow.

The Symbols:
• Two Cane Knives diagonally crossing over each other
• With a Stalk of a Sugar Cane Pillared at the centre
• A Sugar Cane Plant to the left
• A Figure of a Bare Chested Slave to the right
• All resting on a Dhow sailing on the open seas

Their Meanings:
The Two Cane Knives represent the toil of the club’s founders’ forefathers, who came to this land as indentured laborers in the mid 19th century. They worked the sugar cane fields on the Natal Coastlands for their masters under inhumane conditions and with no time or resources for education, sport or aesthetics. The central Stalk of a Sugar Cane represents the product of their toil, from which emerges the grains of sugar that give all of us the sweet tastes we enjoy every day. It is however the spiritual sweetness that embodies the struggles of life and hard
work for hope in the future, through which the stalk radiates its true centrality in this picture.

The Sugar Cane Plant represents the manifestation of continuity, of stems and leaves, of perennial harvest and of never-ending growth. In short, it represents you and I and those yet to come.

The Figure of a Bare Chested Slave represents a time even more grueling than that of the indentured laborer and it is a reminder to our great African City Joburg, that we continue to attract peoples from all over our continent and the world, from all
strata of society, some hoping to find refuge, and others hoping to start new beginnings. All great cities embrace diversity in their cultural awakenings and from it flows raging rivers of talent waiting to deposit its silt onto the banks of modern life.

The Dhow represents our travels; both in hope and despair, but travels nevertheless:

o From high seas to calm waters
o From slavery to freedom
o From all work and no play, to work and play

And on that course, life’s compass is sure to lead us to our TRUE NORTH – and the CAPTAIN declares “VICTORY IS CERTAIN”.

After all, as someone once said: ”CRICKET IS LIFE, EVERYTHING ELSE IS JUST DETAIL”. Sponsors and the Irish connection

There are many varied facets to our Volunteers, Sponsors and Sponsor Organisations and their numbers are many. Some of our Sponsors have exceptional historical commercial and political careers. Notably, the late Human Rights Advocate George Bizos. As an Honorary Life President of the Club, he generously gave of his time to mentor to the Players both young and old. He attended all our Community Events and Presentations right up to the year before his passing.

Indarin Govender, the Chairman of the JCC and one of its founders is no stranger to schism and transformation and he’s the driving force behind the Club. In his professional capacity he formed part of the South African Facilitation Team who in early 2000 worked on the Prisoner Reform Program around the Good Friday Agreement. He is a firm believer that the lessons one can acquire in playing sport in general and cricket in particular can equip you for life in general. He considers himself humbled and fortunate to be able to pass on the virtues of this great game to the next generation helping them to build a sense of worth and being. Nowadays he devotes his time to enriching the lives and futures of his JCC Family.

The former Ireland International Rugby Player John Robbie came across the club and its work while presenting for the 702 Radio Breakfast Show. He was so moved by the ethos of the Joburg Cricket Club that he became a strong and constant promoter. He even used to broadcast his show from the Clubhouse once a year. Through his connections with Celebrities and Captains of Industry the JCC are able to continue and expand their work within the community. His continued interest and support in the Club is invaluable. Image: The JCC Under-15s side

Another prominent Irish man within the club is a Developer born and raised in Portmarnock. David Nagle, an investor in South Africa, specializing in Golf and Residential Estates, was introduced to the Club by John Robbie. He says, “it would have been easy to just make a donation and walk away but there is something about this Club and its Family that makes you “need” to be part of the Bigger Picture”. Several of his companies provide sponsorships in differing ways to the Club but the most significant and continuous assistance is given by “The Eye of Africa Golf and Residential Estate.” They supply and serve a cooked lunch every week to around 200 children who attend the Saturday Cricket Clinic. For some of these children this is the only hot meal they get.

In 2019 our young Premier League, 1st Team showed great promise with marked improvements in their results on the table. Sadly in the past year and a half COVID has put a stop to all our matches for the 4 Senior Teams and 4 Junior Teams. The boys are resolved to maintain focus and training whenever breaks between Lockdowns allow.

In early January last year the new Gauteng Central Lions CEO, Jonno LeafWright, invited 30 of our younger ones to The Wanderers to attend the SA v England Test Match, with hospitality. Its gracious gestures like this that will live long in the memories of our JCC babies.

The highlight in the Joburg Cricket Club calendar and our largest annual event is the “Friendship Day” Cricket Match. Held in November, the day sees two teams of sporting and non-sporting celebrities, captains of industry and local business owners, men and women pit their wits against each other in the form of a gentle cricket match. Image: A Saturday morning session with the kids

The proceeds of this event secure the future of the Joburg Cricket Club for each coming year and enable the Club to continue providing and funding other Community based projects.

A Partnership with an inner city security company, Africa Hands now provides us with guarded security 24hrs a day, 7 days a week. This has enabled us to make fuller use of our facilities on a daily basis.

The government’s recognition of the benefits of outdoor learning has prompted several inner city schools to take up our offer to utilise Hope Village during school hours. Enabling them to provide Physical Education activities in a safe and secure environment.

Additionally, we have entered into a Partnership with The Nationwide School providing them Cricket Coaching. 20 of their learners from this inner city school participate in this program, which takes place 3 times a week. Four days a week the Under 13’s, Barefoot Ruby Project now train at Hope Village. 20 boys train in these sessions and they also join our Saturday Clinic.

Between Lockdowns, Meryl Plasket and the Earth Rise Yoga Team have continued to provide Socially Distanced, Children’s Yoga Lessons on Saturday Mornings. In todays society “mindfulness” is taught as a lesson in mainstream schools so many of our JCC children will never receive this exposure. Earth Rise Yoga are a team of dedicated volunteers determined to change this. Pre-Covid the Saturday Cricket Clinic and Eye of Africa Golf Estate Feeding Scheme were at full swing with some 200 participants. The Clinic is run by the Club Captain and several team members. It’s an open invite into Hope Village each Saturday for ALL children from the neighbourhood. Regulars include several of the schools and orphanages in the immediate vicinity. The Clinic aims not just to teach the children how to play cricket but instill in them the benefits and respect of becoming a Team Player. These children range from 2 years to 17 years old. Regardless of whether they wish to learn to play cricket or just run around in a safe and protected environment for a few hours, no one is turned away.

The Clinic has come full circle and successfully produced a lot of the JCC’s current players, some of whom are now in the Premier League Team and teaching the younger ones.

After a hard morning of Yoga then Cricket Training each child receives a warm meal and drink ensuring they go home tired, full and happy. The JCC firmly believes that even the greatest Sportsperson requires a good level of academic ability. Our Academic Support Programme for our high school members takes place after the Saturday Clinic. Volunteer students from Wits University and the University of Johannesburg steer these sessions providing assistance, support and guidance to all our Members who require a little extra help on a specific topic or generally wish to improve in their studies.

Youth Unemployment is a serious issue in South Africa. The heady combination of nothing to do, nowhere to go and time on their hands poses obvious issues. The Joburg Cricket Club has partnered with TASK Further Education and Training COMMUNITY COLLEGE (TFCC). TFCC use the facilities of the JCC Club House to hold their lessons and seminars for up to 20 students. They are leaders in Skills Training to sustain the initiatives of the Gauteng government’s youth empowerment programs.

TFCC provides a diverse range of certified, professional, theoretical and practical training courses to High School graduates. The aim is to create competitive individuals who can add value to any enterprise and it gives inexperienced youths an opportunity to gain much needed experience in a competitive environment.

Read a recent interview with John Robbie in the Sunday Times.