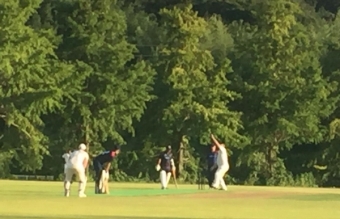 As the Irish Rugby team was running out at the 2019 Rugby World Cup in Japan, another Irish side was battling it out on a Japanese sports field. Philip Whelan from The Walnut Taverners takes up the story.

As a Dublin-based Taverner side which loves touring, ‘The Walnuts’ were really looking forward to this fixture. The idea was first mooted about 18 months previously by Pat Tunney and I began to explore the chance of playing a cricket match in Japan whilst following Ireland in the Rugby World Cup 2019.

Contact was made with Alex Naoki Miyaji, the President of Japan Cricket. Alex has done immense work in progressing cricket in Japan culminating with the success this year of the Japan U19’s qualifying for the World Cup in 2020. Alex kindly put us in touch with Alan Curr the CEO of Cricket Japan and he arranged the fixture between the Walnuts and the British Embassy Japan XI.

The match was to be played at 2pm on 23 September at Sano International Cricket Ground, which is about a two-hour drive north of Tokyo.  A T20 game was proposed following Taverner rules of 20 runs maximum per player, and each player bowling a minimum of one over and a maximum of three overs

It was with mixed emotions that we set off for Japan on September 19 as our Club President and dearest friend Dr. Pat Tunney had passed away in June. Together with myself he had helped to arrange and organise this trip and was so looking forward to it. He is deeply missed. May he Rest in Peace.

The logistics of putting together ANY Walnut Tour is a lesson in forbearance!

Normally we have anything from 16 to 20 Players/(Support Guys..!) keen to hit the departure lounge at Dublin Airport suitably attired in Club polo’s and bonding together over a pint or two. But this trip was a little different, as some of our members were already in Japan - Dave Bursey was over in Japan playing for The Parliamentarians Rugby Team (he had already encountered Japanese culture, both physically and mentally, and had a head start on the rest of us), our international Lacrosse member Tadhg Bolger was in Shinjuku sipping Sake by the time we were checking in, and David Green was finishing a year out cycling across Asia.

Getting our group together from diverse locations across Japan for a 9.00am departure from our Hotel in Tokyo after the Ireland v Scotland match in Yokohama the evening before was worrying, but The Walnuts are made of sterner stuff! Image: A fabulous backdrop to the game!

Despite a slight delay setting off, our star player and hijacked guide for the day, John Blakeney, steered us through the many train connections with ease. John is an ex-Merrion and Trinity player and indeed had played for the Paddy Foleys Cricket Club Japan from 2009 and 2011. He knew his way around.

We arrived at the Sano ground at 1.30 pm to find Big Dave already there. Nodding disapprovingly at our tardiness, he uttered: “What kept you?”

Got to admire his assertiveness!

After a few words of solace to Keith Franklin, the British Embassy Cricket Club (BECC) captain and a Scot, we dispensed of the coin toss and opted to bat first. If only the same spirit and ethos of cricket could be applied to Brexit, The Walnuts and the BECC could have solved that conundrum in one innings!

In very humid conditions and with temperatures hovering around the 30 degrees plus, our 10 remaining players took the field. Keith, in response, fielded a team of 10 to equal the numbers that we had available. Dave Bursey along with Asala Asanka Wickramaarachchige opened the batting for The Walnuts. Dave was very unlucky to be out early for 1 run to some fierce bowling from Mohamed Yusry, but Asala along with John Blakeney put up a great partnership reaching their 20 runs max wity some very impressive batting.

I was up next as fourth man, but succumbed to great bowling from Augustine Jacob - very cheaply out for a single run. The bowling from the BECC openers Jacob and Yusry was exceptional and they both picked up a handful of wickets between them. From a reasonable enough start our middle order collapsed with David Sheridan making 4, Andy Lamont 3 runs and only Hugo Lamont a respectable 12 runs. Tadhg Bolger and David Green, although they batted valiantly, were both out for a duck.

With Walnut player Graeme Cruickshank unable to bat due to injury, it was mutually agreed with Keith - the BECC Captain - that both Asala and John Blakeney could return to the crease to bat at 10 and 11.
They renewed their great opening partnership and put another 12 and 15 runs respectively on the board, both not out, after the 20 overs were up.

Great batting displays by both Asala and John gave us some hope in defending our total of 111 runs.

Unfortunately, it was not to be!

Quick 20’s reached by Duncan Barker, Richard Bracefield, Vikram Rangunathan, and Player of The Match Mohamed Yusry paved the way for a BECC victory. The British Embassy Japan XI reached 114 in the 18th over. Cricket may be a game of statistics, but no scorebook can convey the personalities - or the engagement between players - in a friendly but competitive Taverners cricket match. Our hosts were very accommodating and friendships made are always at the core of The Walnut Taverners when we take to the field of play. This is what makes cricket such a powerful sporting force.

Huge thanks to Keith Franklin, Robert Newman and Jason Fouracres - and indeed the entire British Embassy side - who afforded us such a memorable day. Also a word of thanks and appreciation to Alan and Alex of Japan Cricket whom we had the pleasure of meeting at the ground. Alex was with the Japan U19’s training at Sano when we arrived. Image: The Walnut Taverners celebrate after the match

It was a special pleasure to have John, Asala, Graeme and Dave Bursey turn out for us and wear The Walnut Jersey with pride, and it was great to see newbie Walnuts Andy, Tadhg, Hugo and the two David’s (Green and Sheridan) play with great heart and spirit. And Hugo Lamont who did exceptionally well as wicketkeeper as well as having a great knock.

To all the people who came out to support us on the day, those who travelled with us - wives, partners and family members - and also some of the Irish contingent living in Japan who turned up to show support for The Walnuts a BIG THANK YOU.

Another Walnuts Tour comes to an end. Enjoyable and Entertaining. Friendships gained and friendships renewed.

Thank you Cricket Japan and the British Embassy Japan XI for allowing us to be part of a historic occasion. Image: The Walnut Taverners at the Rugby World Cup