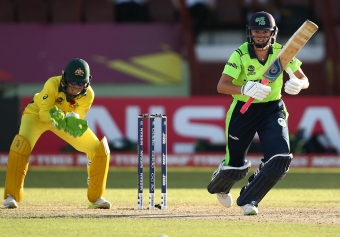 DUBLIN – Ireland Women’s Cricket Team will face West Indies, Zimbabwe and Scotland in a busy year for the national side, ahead of a T20 World Cup Qualifier campaign in late summer – and fans will be able to enjoy three T20 International double-headers with the Ireland Men’s team in July.

The release of the 2019 fixtures comes off the back of the commencement of the development of a new Girl’s and Women’s cricket strategy and the recent announcement of the first-ever women’s part-time contracts to be offered in 2019 and ahead of another World Cup qualifying campaign.

“2018 was a significant year for women’s cricket in many ways – we played 19 fixtures home and away, which culminated in an appearance in the Women’s T20 World Cup in the Caribbean, saw top-class fixtures at home, and a tour to Zimbabwe. It was also a period of generational change as we farewelled our four longest-serving members, but ushered in a new era of professionalism of the sport by announcing that we would be offering the first-ever women’s part-time contracts in 2019.”

“This season we are to take women’s international fixtures around Ireland and the schedule has allowed us to create three double-header events, where men’s and women’s T20 Internationals will share the bill.”

“The larger goal for the squad at this point is twofold – to qualify for the next T20 World Cup in Australia in February 2020, and to ensure our world ranking is maintained so we are part of the new Women’s Championship post-2021. Last year almost 600-caps of experience retired – it will be a challenge to go into this next phase without those players, but when I look at the talent and potential coming through, I believe we are well placed to achieve those objectives.”

“In December last year the Board of Cricket Ireland approved the development of a new strategy looking at all aspects of women’s and girl’s participation, administration and development within the sport. Female cricketers make up around 19% of regular players across Ireland (up from 9% in 2013), our women’s international team is ranked 10th in the world, and we are increasing the representation of women across our administrative and governance functions - but there is much more to do.”

“We are delighted that Maeve Buckley has agreed to become involved in the development of our new strategy. Maeve has 20 years experience in strategic planning, international top-level sports administration and marketing, and has worked on a number of recent strategic plans, both within Irish sport including for the Camogie Association and the IRFU, and internationally with FIFA.”

* Zimbabwe Women’s cricket team does not have ‘official ODI status’, so these games are 50-over internationals but not ODIs under ICC classification
** Matches will form part of three double-header events in conjunction with Ireland Men and Zimbabwe Men

WE CAN’T DO IT WITHOUT…

Once again we would like to thank Hanley Energy, our great sponsors who are supporting the growth of women’s cricket in Ireland.