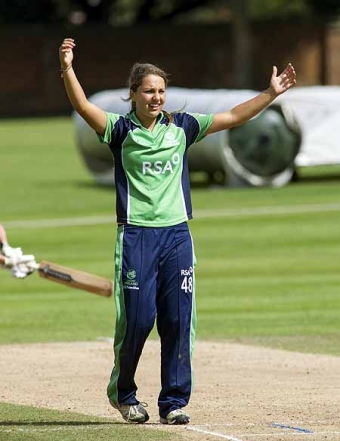 Elena Tice produced a Player of the Match performance as Ireland overwhelmed Scotland to win their third consecutive game in the European T20 Championships in Rugby.

Tice thumped five boundaries as she top scored with an unbeaten 33 from just 14 balls and followed it up with two wickets for just ten runs to strangle the Scottish run chase.

A solid batting effort by Ireland saw 7 of the 8 batters who made it to the middle reach double figures, with Clare Shillington (28) and Cecelia Joyce (19) laying the perfect platform with a half century opening stand.

The Irish batters struck an impressive 17 boundaries in total, rarely missing an opportunity to dismiss anything remotely loose.

The Scottish run chase never got going in the face of accurate Irish bowling, with only Rachel Scholes (20) and Kirstie Gordon (18*) making any impression as they finished on 75 for 7.

Speaking to www.cricketireland.ie following the match, Elena Tice was delighted with the Irish team’s performance: “It was good to get another convincing win, we were clinical with both bat and ball. A really enjoyable game in nice conditions.”

Shauna Kavanagh scored 12* for Ireland, she told www.cricketireland.ie: “It was great to get another win under the belt and beat Scotland in such a convincing manner. We executed our skills in all disciplines and it was a brilliant team effort as well as a very enjoyable game.

“We’re still looking to improve on every performance and carry this momentum forward into the next couple of games.”