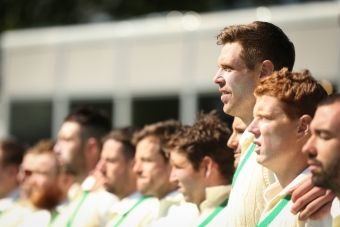 Cricket Ireland has today received confirmation that a ticket ballot will be held for tickets to the recently announced Lord’s Test match between Ireland and England in 2019.

“It is customary for the MCC to operate a ticket ballot for international matches held at Lord’s Cricket Ground, and we have received confirmation that our historic first Test match against England at the home of cricket will be treated the same,” said Warren Deutrom, Chief Executive of Cricket Ireland.

“The MCC advise that the ballot will open in mid-December and close in early January. Irish cricket fans will be available to enter online at www.tickets.lords.org.”

“We expect intense interest in tickets from Irish cricket fans from all over the world, but particularly based in Ireland and the United Kingdom. When we played our first one-day international at Lord’s in 2017 there was a 25,000-strong crowd there on the day, which really demonstrated the demand. To return to the world’s most famous cricket ground only two years later to play our first Test against England will be another memorable occasion and we hope as many Irish cricket fans as possible can make the trip to support our team.”

The historic first Test match between Ireland and England will be played at Lord’s Cricket Ground (www.lords.org) from 24 - 27 July 2019. For those planning to attend, the Lord’s website has a list of frequently asked questions for patrons here.

Before the Lord’s Test, Ireland will be taking on Afghanistan later this month. Tickets are now on sale through Ticketmaster for the six matches in August, with three match packs available.