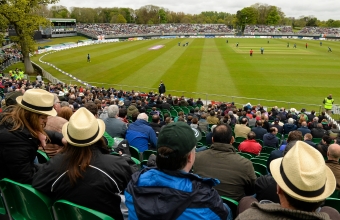 England last appeared in an ODI in Ireland in May 2015

DUBLIN – Cricket Ireland has today announced that tickets have gone on sale for the one-off one day international (ODI) between Ireland and England at Malahide on 3 May 2019.

“The clash with England heralds the start of a busy home season of men’s cricket in 2019, with numerous Full Member nations visiting our shores. This encounter comes almost four years to the day that England appeared in a match in Ireland, so this is set to be a highly sought after ticket for Irish cricket fans.”

“England is currently the number one ODI side in the world, and set to host the 2019 Cricket World Cup later in the summer, so they will be eyeing this match as a key part of their preparations for the World Cup.”

The match also comes nearly two years from the last time these two sides met in the ODI format, when Ireland played a two-match series at Bristol and Lord’s in front of large crowds.

Tickets can be purchased through Ticketmaster.

NB: An additional booking fee applies to all purchases made through Ticketmaster.

There will be additional information provided shortly regarding Club ticket opportunities. You can also read our Ticket Refund Policy here.

Limited hospitality packages are additionally available from €349 per person, including seating in the hospitality marquee, continental breakfast, luxury lunch and a complimentary bar.

Further information on these packages, including booking forms, is available here.