Over and Out: Tim Murtagh retires from international cricket 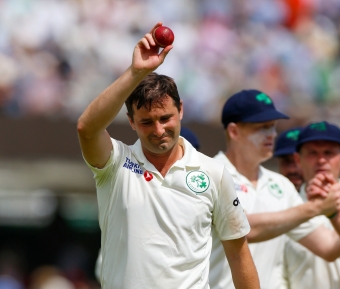 DUBLIN, LONDON – As a fitting end point to a stellar career in the green, Tim Murtagh has chosen to pull up stumps in the international cricket arena, making his Lord’s Test heroics back in July as his final on-field action for Ireland.

The 38-year old seamer made his international debut for Ireland in 2012 after a fabled conversation with Ed Joyce about the London-born Murtagh’s Irish ancestry led to the Middlesex man declaring for Ireland. He received his first cap for Ireland in a one-day international against Australia in Belfast, however with the game washed out after 10 overs, it took a further two-week wait for the next match against Afghanistan for Murtagh’s first ball to be bowled in international cricket.

Over the last eight years Murtagh appeared 97 times for the national side, claiming 142 wickets across all formats at an average of 25.54. Defying the career arc of most, it was remarked by many observers that he seemingly improved with age, and indeed 2018 was Murtagh’s best year for Ireland claiming 28 wickets in 11 matches at a miserly average of 16.32. Apart from the wickets, perhaps his most memorable moment with the ball during 2018 was when he delivered the first-ever ball for Ireland in men’s Test cricket at Malahide against Pakistan.

Murtagh then followed up his sensational season in 2018 with 23 wickets in 2019, headlined by taking his career-best figures of 5-13 against England in the Test match at Lord’s Cricket Ground. The Lambeth-raised Murtagh quipped at the time: “To be honest, I didn’t think I’d be on the away board when I first started playing but I’ll take it wherever it goes. It’s a dream for any cricketer playing a Test match here, so I’m just over the moon.”

Delightfully for Irish fans who watched on, Murtagh also posted a career-best with the bat this year, with his first half-century for Ireland in a back-against-the-wall innings in the Test match against Afghanistan.

‪: Thanks @tjm_urtagh for your contribution to Irish cricket - many, many memories, but particularly that 5-13 at Lord’s which is now part of Irish cricket folklore.‬ ‪#ThanksMurts ‬

Recognised for his performances by receiving the International Player of the Year at the Turkish Airlines Cricket Ireland Awards in 2018, Murtagh remarked once that his greatest regret in international cricket was that he never played in a 50-over World Cup – sustaining an injury on the eve of the 2015 World Cup, and part of the ultimately unsuccessful 2019 World Cup qualifying campaign. He did feature for Ireland in three T20 World Cups (2012, 2014, 2016) – the latter of which saw him come out of self-imposed retirement from that format of the international game that he had announced in 2015.

Murtagh has signed a two-year contract extension with Middlesex Cricket and will play red-ball cricket for the county side in 2020.

“This is a day that I have known has been coming for a few years since the ECB changed their regulations, but it hasn’t made the decision any easier. I’ve had eight great years playing international cricket and loved every minute of it. It’s sad that it has come to an end but a decision that I have made my peace with.”

“There are many people to thank for helping me on this journey. Firstly, my amazing wife Karina and the whole family who have endured many weeks/months of me away on tour living the dream. All the management and players from Cricket Ireland who have made me feel so welcome from ‘ball one’. Also, the management at Middlesex Cricket for encouraging me to play at as high a level as I could.”

“A Test Match at Lord’s against England is a great way to finish my international career and a game I will always cherish. I wish the lads all the best for the winter tours and very much hope to help out and be involved in some capacity in the future.”

“Finally, thank you for the support from everyone over in Ireland, both north and south of the border. Very much appreciated and I will be over to see everyone soon.” “It’s sad to see such a great player leave our ranks, but Tim has been a model professional and a great asset to have in the dressing room. His performances on the pitch were top-class, but it is also the weight of experience and knowledge of the game that he brought to benefit young bowlers within the Irish setup that made his involvement invaluable.”

“Irish cricket made the right call when it signed Tim up back in 2012, and he can be proud of the positive impact he has had on Irish cricket. I wish Tim well in his next couple of seasons for Middlesex.”

“While I have played with Murts since 2012, and there have been plenty of memorable moments over that time, it is what has now become his last match for Ireland that will stay with me for life. The feeling we had as a team walking out onto the turf at Lord’s on the first morning was a buzz, but standing at slip and watching Murts run in for that first ball somehow gave us a sense of confidence about the day. Saying that, we didn’t expect the morning we had, but his five-wicket haul before lunch is something that is now etched in Irish cricket folklore. Definitely Murts’ reaction when he took his fifth wicket will stay with me forever.”

“In any team you play in, especially as captain, the value of having some experienced heads around the squad is invaluable. While I won’t have Tim to call on going forward, I’ve appreciated his support and advice in the past – and his sense of humour within the camp. He is the ideal sort of teammate you need on long tours or during hard fought matches, and was a source of inspiration for many. His consistency week-in, week-out in all sorts of conditions was a huge part of some important wins. Indeed, the impact he has had on our young seam bowlers and their development cannot be underestimated.”

“I wish Tim all the best with the remainder of his playing career for Middlesex.”

“It goes without saying that we’re going to miss Murts massively. His quality with the ball is unquestioned, but it is also the sense of calm he brought to the side knowing exactly what you were going to get every time he ran in that we’ll also miss. In an era where pace is often regarded as the be-all and end-all, he has shown that good old fashioned line and length and relentlessness is still as good an asset as it always has been.”

“My favourite Irish cricket memory as a spectator is watching us bowl England out on the first day of the Test at Lord’s. The whole team made everyone watching so proud, but Murts in particular was absolutely top class that day. Managing to get his name on the honours board at the Home of Cricket is a quite incredible achievement.”

“Something that is also not often spoken about is the fact that he rarely got injured which is extremely unusual for a fast bowler. This shows the work he did off the field to stay fit and all those extra sessions in the gym that people on the outside wouldn’t have seen.”

“He’s also a brilliant bloke with a wicked sense of humour and the dressing room will be a very different, and less entertaining, place without him. Without doubt he has been one of Ireland’s greatest cricketers. I’m proud to have played alongside him both for Middlesex and Ireland and I hope we see him helping our younger bowlers in the future in some way. Murts, congrats on an amazing Ireland career.” “On behalf of the management and staff of Cricket Ireland I’d like to thank Tim for his eight years of service to Irish cricket. It only seems like the other day that we were organising the paperwork to allow him to declare for Ireland - while you always hope for the best when opportunities like that arise, little did we know the impact he would have on the international setup.”

“Irish cricket has been on quite a journey over the last decade, and Tim has certainly played a key role in our rise. That the Lord’s Test will be his last game for us is very appropriate, and he certainly gave a lot of Irish fans great pleasure on that first morning having written his name on the Honour’s Board before Lunch.”

“We know how hard the decision was for him, but we wish Tim, Karina and his family well. I would also like to thank Angus Fraser and all at Middlesex Cricket for their support and flexibility in working with us on Tim’s availability for internationals and tours. Cricket Ireland and Middlesex have had a great relationship over many years, and it is always appreciated when club and country can work so well together for the benefit of the player.”