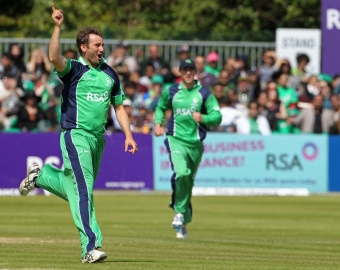 Ireland bowler Tim Murtagh has signed a new contract with Middlesex County Cricket Club, the seamer who first played for Ireland in 2012 enjoyed a superb season last year for both Ireland and Middlesex.

Middlesex County Cricket Club are delighted to announce that Tim Murtagh has signed a new three year contract with the Club. The new deal means that Murtagh will be available to play for Middlesex CCC until at least the end of the 2016 English Domestic Cricket Season.

Since signing for Middlesex CCC from Surrey CCC, Murtagh has become one of the most effective and leading fast bowlers in County Cricket. In total the 32 year-old has taken more than 550 wickets in all forms of cricket. In the past seven seasons of first-class cricket no English bowler has taken more wickets than Murtagh, who has claimed 410 scalps at an average of 24.77. In 2013 he was the third highest LV=CC Division One wicket-taker with 60 wickets.

Murtagh’s excellent performances for Middlesex CCC and his Irish ancestry have been rewarded by selection for the Ireland National Cricket Team, who he is now a regular member of.

Commenting on Murtagh’s signing Middlesex CCC’s Managing Director of Cricket, Angus Fraser, said: “It is great news for everyone at Middlesex CCC that Tim has committed his future to the Club. Tim has been a pivotal figure in the progress Middlesex CCC has made in the past three seasons and we believe he still has plenty to offer. It is not only Tim’s contributions on the pitch that make him such a valuable player. He sets the right example and plays the game the right way - hard but fair - and enjoys what he does.

“Tim may not be the quickest bowler in county cricket but he is as skilful and competitive as any bowler around. He is selfless and there is not a day when he gives the team anything less than 100 per cent. For someone responsible for running a sporting team you can ask for no more.”