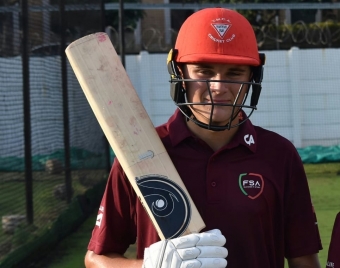 DURBAN, South Africa - Every winter in Ireland a number of Irish cricketers head abroad to play club cricket in the southern hemisphere. Thanks to a partnership with Futura Sports Agency in South Africa, 16-year old Tim Tector is spending some time in Durban.

Part of the Shapoorji Pallonji Cricket Ireland Academy, Tim was captain of the Under-15s Ireland team last year and played for the Ireland Under-19s at the Under-19s World Cup Qualifier tournament this year. He recently updated us on his South African stint:

“I have now been in Durban for two-and-a-half weeks now. I was greeted at the airport by Paddy Steytler, Director, Futura Sports Agency, who brought me back to their offices where I met the Futura team. Craig Yelverton is the Head Coach and Shaun Elliot is the Liaison Officer and also does some coaching.”

“Most of the time we train at a school called Ashton College which is north of Durban in a place called Ballito, but the odd time we train at Glenwood High School or at Kingsmead Stadium, which is an international venue. It is my first-time playing cricket outside of Europe, so it took me a couple of days to get used to training in the heat.” Image: Tim has been going through intensive coaching with FSA

“Apart from the training sessions, we have early morning fitness sessions which take place either in the gym or on the beach. We also have recovery sessions every couple of days which mainly involve ice baths.”

“On our first weekend, Paddy brought us up to the Hluhluwe & Umfolozi Game Reserve. It was amazing to see all the African wildlife there and see them up close. We were very lucky to have witnessed so many animals including four of the big five - being rhino, elephants, buffalo and cheetahs.”

“We have also had chats with Simon Trollip who is a Mindset Coach and Justin Bodill who focuses a lot on Team Culture.”

“I am really enjoying my time so far and I can’t thank Paddy and the guys at Futura enough for everything they have done for me.” Image: And spending some time at the Kingsmead Stadium

“The opportunity for young players like Tim to go and live abroad, play cricket in a variety of conditions and experience different cultures is an important part of the talent pathway. Through partnerships with the likes of Futura Sports Agency, or official scholarship programmes like the one we have with Randwick-Petersham Cricket Club in Sydney, we are increasingly able to provide our up-and-coming talent experiences that will help develop more rounded, confident cricketers.”

“As Ireland tours more to a variety of countries, to have young players who have experienced those conditions and climates will be of great benefit. Tim is doing remarkably well, and we thank Paddy and the team at FSA for looking after him so well.”