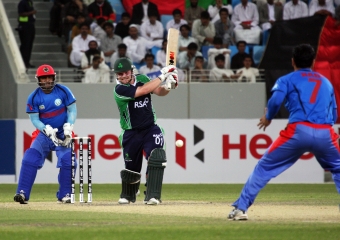 George Dockrell, Ed Joyce and Paul Stirling will once again battle it out for a major award after being named today on a shortlist of three for the RSA International Men’s Player of the Year at the Inaugural RSA Cricket Ireland Awards next month in Dublin.

The trio were recently nominated along with Kevin O’Brien in the ICC Associate and Affiliate Player of the Year category - with Dockrell emerging victorious - and another close contest is expected for the honour of becoming the first ever RSA International Men’s Player of the Year.

The three players were each very successful during the voting period (from November 2011 onwards), with 20-year-old George Dockrell the leading senior wicket taker with 37 at a miserly average of 14.27. His best bowling return of 5-37 came in the Intercontinental Cup win against Kenya in February.

Paul Stirling was the leading run scorer for Ireland, rattling up 741 runs at 32.22, including five half centuries. His top score of 79 came against Afghanistan in the ICC World Twenty20 qualifying final - a breathtaking exhibition of power hitting that helped Ireland to a five-wicket win. In addition the 22-year-old claimed 21 wickets at 19.43, with a best bowling return of 3-20 against Namibia.

Ed Joyce topped the averages with 681 runs at 35.84. Like Stirling he scored five half centuries with a top score of 88 against Kenya. His most important innings came when he made a gritty 67 in the low-scoring World Cup qualifier ODI win against Afghanistan in Dublin, while his 78 versus Scotland in Dubai earned him the Man of the Match accolade. Ireland coach Phil Simmons paid tribute to the nominees saying: “All three are worthy candidates as they’ve been exceptionally strong and consistent performers over the past year. There’s a great blend of youth and experience in the Irish squad at present and that’s reflected in the nominations.

“Ireland has been prominent in recent award ceremonies at Associate level and that’s indicative of strong team performances. These RSA CI awards provide a great boost to all involved at Irish cricket and I’m sure they will be a welcome fixture in the calendar for years to come.”

The Women’s category is also hotly contested with three outstanding candidates short-listed for the RSA International Women’s Player of the Year Award. The Women’s team enjoyed unparalleled success in 2012 winning the ICC European Twenty20 Championship, as well as the ECB Division 3 Championship and Twenty20 cup.

Cecelia Joyce played an integral part of that success at the top of the order, scoring 355 runs at 23.67, with a top score of 64, skippering the side to European glory following an injury to her sister Isobel in the deciding clash.

Teenager Kim Garth has been a revelation in Irish colours following her promotion from the junior ranks in 2010. The 16-year-old all-rounder featured prominently taking 15 wickets at 22.67, with a best bowling return of 4-11 against Bangladesh. A more than useful batter, she also scored 250 runs at a healthy 27.78. It was 2012 that also saw Clare Shillington become the first Irish women to win 100 caps. Shillington scored 405 runs at 25.31, with her highest score of 107 coming in the County Championship play-off decider against The Netherlands. The hundred was only the fourth scored by an Irish woman, and the first since Karen Young and Miriam Grealey both scored centuries in July 2000. Irish Women’s coach Jeremy Bray said of the nominees: “It’s a great initiative to have the inaugural RSA Women’s International Player of the Year, as it will give a further boost to the growing profile of women’s cricket here in Ireland. There are three very strong candidates short-listed with a good mix of youth and experience.

“Kim Garth has had an outstanding year with both bat and ball especially considering she is still only 16, while Clare Shillington has been our stand out batter with the highlight of the season being her century against the Netherlands. Last but not least, the experience of Cecilia Joyce at the top of the order continues to be a great asset to the team.”

The inaugural RSA Cricket Ireland Awards will take place in the Round Room of the Mansion House on Friday November 16. Seats and table sales are available now, for what is a gala celebration of Irish Cricket hosted by Today FM’s Matt Cooper. For further details please visit http://www.cricketireland.ie/awards

For more details on the RSA Cricket Ireland Awards click here. You can make YOUR nomination in other award categories as well. To reserve your seat at the Awards NOW click here