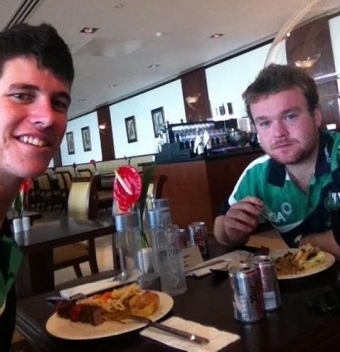 Getting some grub with Stirlo at our stopover in Dubai

Throughout the ICC World Twenty 20, we will have an exclusive ‘Tour Diary’ that will feature a different member of the Irish squad each day. The diary will appear at lunchtime each day here on www.cricketireland.ie

First up is Leinster and Somerset left-arm spinner George Dockrell.

The ICC World Twenty20 is almost here! Paul Stirling and I left England together to travel to Sri Lanka on Tuesday. I have to say, travelling business class is the way to go and it’s all the better going with Stirlo! We met up with the boys in Dubai which was great, as it’s been a while since I’ve seen most of them.

We arrived in Colombo on Wednesday morning well rested and had a bit of a run around to stretch the legs. Our first full training session was yesterday and we had a really good session. We trained in local grounds and were split into concentrated groups – I was with Stuart Thompson and Max Sorensen. Fielding was first and then we did some bowling which gave us a chance to get used to the conditions.

The Under-19 trip was good; we played some decent cricket and were happy with how we did overall, there were obviously highs and lows throughout the whole month but on the whole it was a very good experience with a really great bunch of lads. Before the tournament Ireland U19s were ranked 13th in the world and we finished 12th so at least that’s a move in the right direction. It was a fun month in a beautiful country and we learned a lot. I really enjoyed being captain and all that came with it; it’s definitely something I would want to do again in the future.

I’m still one of the younger players at my county Somerset where I had my first full season this year. Last year I was injured so it was great to play almost every game when I was around this year. I really enjoyed the four-day cricket where I took 32 wickets in 10 games. It was frustrating to lose the T20 semi-final, though, and to come third in our group in the CB40 competition. I’m really enjoying Taunton on the whole though and am very happy down in Somerset.

But it’s great to have a few weeks to get back into the groove of playing for Ireland ahead of the ICC World Twenty20, the extra time that we have here thanks to the training camp week that we have will be invaluable for acclimitisation to the very different conditions. The good news also came on arrival that we have managed to get an additional warm-up match scheduled, meaning we will start our match practice on Monday with a match against Sri Lanka ‘A’ at the superb Sinhalese Sports Club ground.

After our bowling session yesterday it was back to the hotel for lunch and a welcome nap. Brendan Connor, our Strength and Conditioning Coach then took us for the afternoon where he put us through our paces in strength and conditioning and I finished off the day’s training facing some net bowlers.

After all that I was shattered and was only interested in was a good night’s sleep to make sure I was ready for another good day’s training.